Back on the Pitch!

After a little reprieve from high school soccer, I refereed a full slate of games in a tournament (Southampton Cup) this weekend; (8) total. Though cold at the start both mornings, the sun warmed up the fields nicely. Surprisingly, I refereed the younger age groups (mostly Boys U12). That is something I do not do much of anymore - the younger ones.

The good thing was that the games were on the hour with 25 minute halves. The play to score has to be quick - because there is no time to waste with this weekend's format.

I could certainly do without all the SCREAMING from the parents, but that is all part of the game. The big thing from all the yelling and screaming is that the players cannot hear the proper instruction from their coaches - the biggest travesty of all. Being cool calm and collected while flipping cautions (yellow cards) to several players throughout the weekend was, frankly, the best way to combat unsporting behavior I witnessed.

A few people have asked me lately if I referee soccer or futsal indoors? Nope! Not a chance. I love being outdoors; even on a cold winter day. Not many like to referee in rain, and I'm in that camp too. Plus, I could not take the all the blasting whistles while indoors. That's like murder to my sensitive eardrums.

Cheers to fresh air, getting in a lot of miles (fartlek) and having fun with my fellow refs! 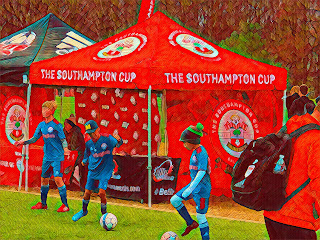