Cold and snowy, with lots of ice ushered in this year's Valentine's Day in the Mid-Atlantic. No outside activities with "black ice" on board every sidewalk and passageway. However, this all lends itself to snuggling on the sofa with a cup of hot chocolate, and perhaps a piece or two of chocolate and a good movie! What's your preference?

Here's hoping everyone enjoyed their day and/or weekend celebrating...or not. My guys got me a beautiful bouquet of flowers! Now, that is a nice way to treat a loved one who loves flowers like I do! Thankful! Blessed!

Quilt below made by me; blocks from a guild Block of the Month (February of a recent year!) 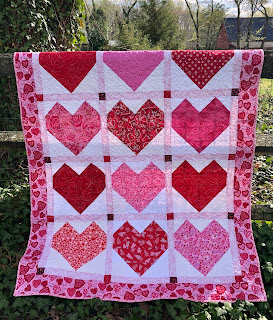 Posted by Terri Tomoff at 7:28 PM No comments:

Remember my 12 person "Showbox Swap" I mentioned a few weeks ago? I completed the first round with Cappy Phillips "Wonky Winter Trees." She gave us "carte blanche" to create wonky pine trees in soft "winter woods in the snow" colors...and feel. A lot of swappers are adding some coordinating fabrics to go along with whatever block they are requesting, and Cappy was no different. The background I used for her blocks was provided by her. She also had a dark green in the bag that I used the front and back of (Cappy always says we pay for two sides of the fabric, so why not use them if it's available to do so?). Not all fabrics can comply with that thought, but the green Cappy provided was just the ticket to use both sides! Violá!

I will be swapping the next round with my swap partner who also lives in Crofton. She will get the "Wonky Tree" ziplock bag ("shoebox"), and I'll get what she worked on the past couple of weeks. The swap will go on for the next year—heading not only to swappers in Maryland, but Arizona and Florida too! It will be very exciting in the next year on what everyone makes for everyone else. It's off the chart fun for us quilters! All of the ladies are inspirational and creative and I am thankful to be a part of a wonderful effort in this swap (thanks, Carrie for organizing!) 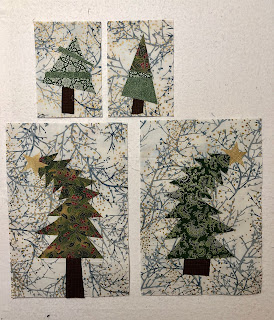 We all know the postal service is running a little behind, but come on! My order for Ryan's Christmas present was placed on December 9, 2020. I thought this was plenty of lead time before the Christmas holiday. Oh, how wrong I was. Ryan mentioned to me that he would like a larger cutting board instead of the ones in our repertoire—some barely bigger than a "postage stamp." After he cooks, grills and smokes, he typically needs to cut something (like a full chicken, or brisket). The smaller cutting boards do not cut it—pun intended! I took to the internet to find the "perfect" board so RyGuysBBQ can continue making delicious meals. I think I knocked it out of the park on the size (24"X18"), as well as the beautiful wood patina. I ended up purchasing the largest one they had because the reviews mentioned that you never want a smaller one. I heeded their advice for my purchase. I believe this piece of hardwood will last for generations!

Christmas is a out of our sight, but today it was brought to the forefront after the delivery. "Merry Christmas, Ryan." He was very patient in waiting for its delivery. There was nothing we could do about that.

For those interested in a great cutting board, check out the  https://butcherblockco.com/boos-cutting-board 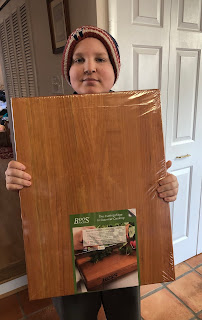 Posted by Terri Tomoff at 9:39 PM No comments:

For 55 years the NFL's Super Bowl is the quintessential game of the year. However, it's in the last 20 years or so it's been a "big deal." From the advertisements, intermission acts and the price of a ticket, it's gone way over the top. We are comfortable to watch in on TV like the millions all over the world who will tune into the iconic game.

Buccaneers or Chiefs? It doesn't matter to me on the eventual winner, but let's have a good game, guys! To make the game interesting for our household, Ryan, one of the elite aficionado's of any game, sweetened our viewing experience by having us fill out a "prop bet" sheet by Draftkings. The winner collects a prize (provided by him), a $20 gift card to Target. I'm in! 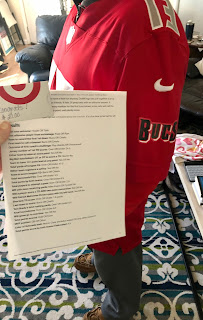 Posted by Terri Tomoff at 4:44 PM No comments:

I don't know about you, but if you like snow, do you like ice? However, these cold winter days turn that snow and then, perhaps a little rain when the temperatures go up a bit, then back to ice when the temperatures dip below freezing. It's a cycle as we all know, but maybe not love. Definitely a problem for walking on it, or driving if the roads are not serviced. I'm thankful to be ensconced (I like it better than "lockdown") in my home and taking no risks with the ice, except to walk on a cleared sidewalk to take the photo below! 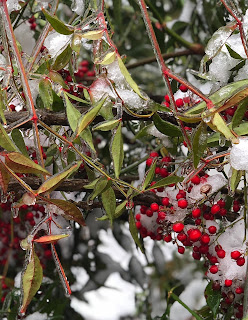 Posted by Terri Tomoff at 11:48 PM No comments:

It’s Groundhog’s Day in the USA and I think we may have six more weeks of winter if that Phil-guy saw his shadow, or not. Today is also my favorite aunt’s birthday! As a kid, Feb 2 was an easy day to remember. Unfortunately, I never had grandparents, so Aunt Mary enjoyed the status of being a “replacement” grandparent to me and my sisters with the added status of being the “favorite aunt.” My parents were the babies of their families, and got married a little later than life than their peers, so by the time they started their family all their parents had passed away years earlier. Older cousins of mine have many memories of my grandparents on both sides of the family, but old family photos of who they were cannot replace a pair of loving arms wrapped around a small child.

Thankfully, my Aunt Mary became that special person in my life. I spent a lot of time at her home, and she taught me the basics of cooking, and more preferably, baking. She and her sister, my Aunt Lottie, could have opened up a restaurant in Cleveland, Ohio, with their delicious delicacies. The Polish community would have patronized it and lines would have wrapped around a city block to get in, but that thought never entered their minds. For them, it was all about feeding their families and their nieces and nephews and their grandchildren—notice how I put nieces first?—to scrumptious Polish cuisine.

My first trip to Poland was with my Aunt Mary in 1977. We stayed with our family (home built in 1929) in Ostrów Mazowiecka (about 1.5 hour drive (East) of Warsaw—near the Russian border). The matriarch in Ostrów, Mira, was my aunt’s first cousin and it was the first time they had met. We had a ball touring and enjoying everything we could in Poland for six weeks! I also ran in the Polish Olympic Track Meet in Krakow as a 15 year old where my aunt was my chaperone.

I’ll write more about the track meet in a later post, but today it’s all about remembering my wonderful, and very favorite aunt, who loved me and catered to me whenever I could visit her (staying the weekend with her was the best!)

My husband, Bill, and Aunt Mary on our wedding day June 13, 1987. Sadly, Bill didn’t have grandparents either, or any aunts and uncles that he knew well, so Aunt Mary became his favorite aunt too! Their love for each other was mutual, and once married, we would both spend a day with her in her kitchen and “let her” cook the most delicious meals for us. Those special days will never be forgotten! 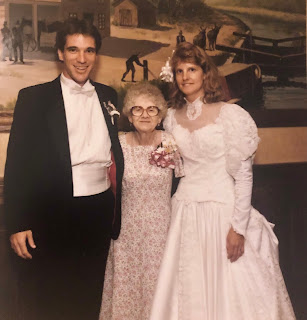 Posted by Terri Tomoff at 10:41 PM No comments: