Visitors: From DC to Annapolis to Baltimore

It's always great to be a touring in your hometown. Luckily we live in an area to explore various parts of the metro areas including The Mall in Washington DC, Downtown Annapolis, MD and the NFL game - Baltimore Ravens vs. Cleveland Browns in Baltimore, MD. I did all the touristy things with the gang except the football game (Bill went with Ryan from our family). When two out of three nephews brought their girlfriends, checking out all three areas became a priority. We were happy to oblige as much as we could.

I'm thankful that it seemed everyone had a great time. Making new memories were key to hosting the weekend and I look forward to more fun during this holiday season. 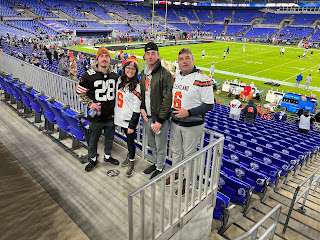