I posted the following to the Writing in Community 3 (WIC3) and figured it would be good to post here too. I hope you enjoy it!

A crisp autumn long walk at the ocean’s edge is cathartic, if not life-changing for a long minute, with a gift of a beat up conch sea shell smack dab on the wet sand. It was like the universe was saying to me, this beat up shell is for you. It’s cracked, but still strong.  It has kept its form and has good color, just like you. I “found” it, or perhaps it found me, as I walked further and further away from the few people and dogs scattered along the shoreline as I started my couple mile journey. My family and I were at the beach for an end of October wedding and most of the festivities. But the ocean kept calling me. I knew what I had to do the next morning: a solo walk to soak in the salty air, the sounds, and the sea.
No matter the day or time of year the ocean never disappoints.
Due to a very strong storm the day before the wedding that actually closed down Highway 1A, along with finding another venue for the rehearsal dinner and other obstacles thrown into this family’s path, the water surge was so strong that the bride lost her car to water damage from parking it in her hotel garage. She wasn’t the only one who lost a vehicle, several cars were underwater and had to be dealt with over this weekend. Ugh!

So at the very end of October 2021, it wouldn’t surprise anyone that from that terrible storm, gifts from the sea were scattered everywhere. The earlier risers may have found a keeper or two in seashells, but the best one was there, waiting for me, or at least I’d like to think so.
I saw it in the distance and couldn’t make out exactly what it was. For all I know, it couldn’t have been a piece of trash like a plastic bag filled with sand. Once I inched closer and closer, it wasn’t a bag at all! I was almost giddy on the find. Once upon it, I immediately thought back to one of my favorite books: Gift from the Sea by Anne Morrow Lindbergh. In Ms. Anne’s book, she meditated on her youth, her marriage, her peace and solitude and finally, gratitude, during brief vacations by the sea. She drew inspiration from the shells she found almost daily along with her musings in just about everything in her life at that time.
It was my found shell that I heard the whispers of the sea. It wasn’t a perfect intact shell, but neither am I. Maybe that’s why I was so drawn to it. The shell showed what my life is all about as I stare down a milestone birthday this November. Though beat up and cracked a bit, it still showed its beauty. The flaws merely cast the realization that we can get beat down, broken in some areas of our lives, but still stand strong and have meaning. The desire, of course, is to be accepted whole.
The shell showed me that life is messy. It has holes. Its living whole in the midst of life’s distractions and trying to find some balance that shows true strength.
The shell taught me that I can be accepted just the way I am.
BSoleille!
Terri 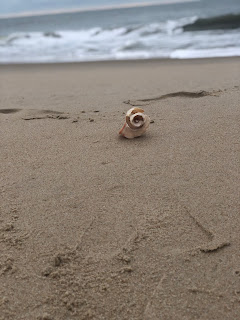 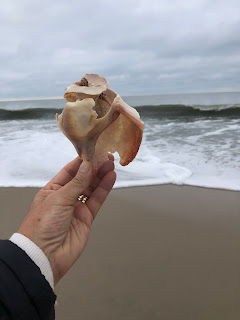