There are a few ways to adopt a puppy dog. Below I highlight two ways: through the foster program, or fire by storm on-the-spot—wham bam thank you ma'am.

A friend of mine has recently "adopted" a cute puppy dog. She was able to tell the story on how hard it is to adopt a furry pet, perhaps almost as hard as adopting a human being, or at least that was her experience. The foster mom actually drove out to her house, a two hour drive, mind you, each way, to do an extensive home visit...twice. Not only did my friend and her family need to make the cut, but so did her other cute dog. Not only is her cute dog well trained and behaved, he has the dubious distinction of being a CGG, a Canine Good Citizen. Apparently, the first time the foster mom visited, everything checked out except their CGC dog. The foster mom left no further information regarding if they were "in the running" or not when leaving their home. Hmmm...

A few weeks later, the foster mom reached out to my friend once again. Maybe she'd gone through everyone on the previous list of who wanted this pup, and they were not quite the right fit either. I'm betting no one had a CGC dog like my friend, who they thought they were still in the running. So the foster mom drove back out to my friends' for another and last visit. This time, however, they were a fit. The puppy dog is theirs now for a trial basis.

This story got me thinking of how we adopted our last pet; a dog name Lucy (AKA - spelling only; Loo-C-Loo). Once our beloved Wally dog passed away, it left such a huge whole in my heart, I couldn't take it anymore. I wanted another dog pronto like Wally. The winter holidays were upon us and it wasn't the right time to try and tackle finding a suitable pet. I waited it out, still pining for a new dog every day even though we had our Lucky dog, a poodle-mix.

Another good friend, K, who knew about my predicament and my hurting heart, felt similarly about a year earlier when her lovey dog passed. She got another furry friend quickly to fill that "void."

While volunteering at the elementary school where our kids attended, K happened to be in a classroom with a teacher who was lamenting that her sister had a six month old husky/lab mix puppy, but paid it no mind. While this teacher's parents were visiting their other daughter in the South over the holidays, they couldn't take how the dog was being treated. They told this daughter (and husband) that they were going to take the pup back home with them up North when they left. The thinking was that they were retired teachers with lot of friends and contacts, and that this pup would be scooped up in a New York minute once home.

On their way up North, they stopped in Maryland to visit their teacher daughter and her family. Everyone in her household loved the dog, but she was not interested in keeping her. She agreed with her parents to find a new family once they got back home.

During the first week of January when the kids were back in the classroom after the Christmas break, K began telling the teacher that the Tomoff's were looking for a dog, as they lost one of theirs shortly after Thanksgiving. One thing led to another as those things go, and before I knew it, I was driving up to the school to meet with the teacher's parents to see if this puppy would be compatible with Lucky.

I parked in the school parking lot a few cars/vans down from where the teacher's parents parked. I opened up my van door as they walked up. I wanted Lucky to come out of the van to "meet" this new puppy. Well, Lucky never got out of the van. Lucy jumped in like she belonged. Before I could say or do anything, the teacher's dad threw in Lucy's leash and closed my van door. Case closed. The dog was mine now. I couldn't believe what just happened. I took it as a sign that it will all work out.

Driving away from the school, I realized I didn't have any "puppy" supplies, nor a crate. Lucky was 5 years old by then and small—18 lbs. I called a friend in the neighborhood that had big dogs to ask if I could borrow a crate in which she obliged. Then I had to call my hubby, Bill. I knew instinctively he would not be happy about "taking" the dog without his consent too. When I called him to report on the situation, he thought we were just having the dogs meet each other. So did I.

Once home and settled in that first night, I told Bill that I could "return" Lucy to the teacher's parents the next day, as they would have no trouble in finding a home for her. Though I understood that he was upset about the turn of events so quickly (from meet and greet to adoption on the spot), and rightfully so, he acquiesced by finally saying, "that dog is not going anywhere, this will be her home from now on." I was a bit shocked by this announcement though I must admit I did a tiny happy dance in my mind.

Loo-c-Loo was one of the great ones. Once she got through the puppy stage she was awesome. She barked once a year whether she needed to or not. She got along well with Lucky and other dogs who came to visit, sometimes for long weekends. She was pensive as times, an introvert in a doggie kind of way, with piercing deep blue eyes coupled with a shiny black coat. She topped out at 75 lbs.

Looking back she was a great asset in our home. She worked out beautifully, and I'll always be grateful for the time we had with her, and our other dogs, of course. They all made our lives complete, especially while raising kids.

Maybe someday we will get another furry friend. 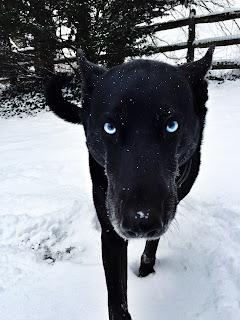