The Lady in the Soccer Suit has Fans!

It is a misnomer to think that in any sport there are only two opposing teams for the competition. In fact, there are three teams on the field; Team A, Team B and the referee team. Referees typically do not have fans accept when you call a foul on the opposing team. Heckles from the fans and coaches are inevitable. They are a part of the game as a long pass or a time out or half time. There is very little, if any, win-wins. That’s the crust of the competition for one team to come out on top at the final buzzer or whistle. Only the best teams and coaches can take a loss with their heads held high. Somethings in life are just bigger than the game. I do see that scenario play out but not enough unfortunately.
But…when the referee has some fans in the stands there is a pep in the step knowing someone is on their side no matter what the call happens to be, or the turnout of the game. I was lucky to have my husband and daughter at a recent game. They are both astute students of the game now that Olivia is no longer playing. They both have been referees as well. They know the split second decisions that need to be made, the dynamic play from both teams, safety of players, plus know the Laws of the Game inside and out that's needed when out on the pitch—especially in the center referee position.
Both Bill and Olivia have not seen me referee in several years. They knew I’ve been honing my skills and being the best I could be out there. The game was a Girls High School Varsity with lots of pride on the line for both teams (isn’t it always, though?). Teams are vying to get into the public school playoffs, so each kick, pass and run is critical.
As the sun was setting and a half moon was rising with a perfect game time temperature, I have to admit, the girls brought an exciting match.  No goals were scored during regulation. In our state, if there is a tie at the end of regulation, the rules state that the game will go into (2) 10 minute overtime periods; golden goal. Golden goal means if a player scores that’s it, they win. Game over.
After the first 10 minutes of OT; scoreless. Both teams had a couple of chances but nothing came of it. It took six minutes into the second OT when a player from the home team shot a  rocket into the goal for the win! The keeper was out of position and this player took advantage and took a chance. Goalllllllll!!!! The stadium erupted and the girls were excited to win in front of the home team crowd.
With a big smile on my face, I walked over to the stands to greet my “fans" and take a few photos. It was great to have their silent support, but they sure had a great match to take in on a beautiful weeknight. I am grateful beyond measure!
BSoleille!
Terri 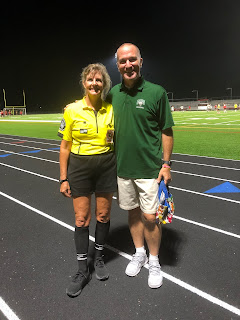 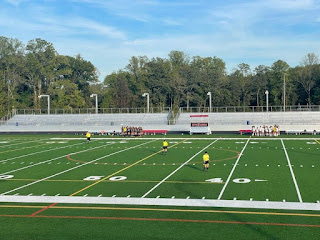 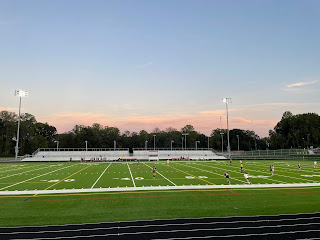 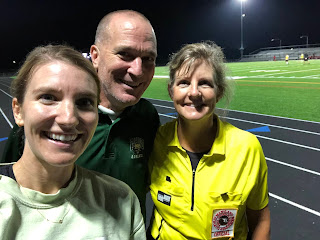