The Lady in the Soccer Suit Story

One day when I stopped at a friends house in a community I was refereeing a game in, one of her son's came to the door after I rang the doorbell. When he saw me standing there in my soccer gear, he screamed for his mom that "the lady in the soccer suit is here!" Hence the name; The Lady in the Soccer Suit.

Every now and again I have a good soccer referee story to share. This week I have a smaller one, but a good one too.

I had all day to think about a game that I was doing in the evening this past week. A six o’clock start with a girl’s varsity match in Annapolis, MD. I was assigned an AR position, or Assistant Referee (running up and down the sideline with a flag, most notably to catch off-sides by the attacking team) It was a glorious day, and the evening was supposed to be just as stellar, though a bit cooler. It was! The sunshine and shadows were stark now that we are into the autumn season.

I knew the other referees assigned to the game, with the other female assigned as the center ref slot. When I arrived at the field, the boys varsity match was on the pitch and our game would be slightly delayed. No problem.

The other male ref assigned to the girls match was already there talking to the AD. Greetings all around as I walked up and we all watched the boys match until the final whistle. As soon as the match concluded both girls teams were quickly filing into the stadium. It was approximately 5:45pm and the center ref was no where around. That was not like her to not be at the field at least 30 minutes before game time.

I’m still in my cocoon brain in thinking this will be an easy night as an AR. A few minutes later I saw our assignor walking onto the field. He was dressed like he was going to ref too. Once he got to the area between the teams and where we place our bags, he said that the center ref was on her way to the hospital with a bad finger bleed. She would not be able to ref the game. He then said that he could do the center, or one of us AR’s. I looked over to the young AR, and asked him if he wanted it (the pay much better than the AR), and he politely declined saying he’s done too many of them lately.

Well, that left me. I quickly left that cocoon of an easy night and stepped up to the task of taking the center. We had already checked players, coin toss, balls etc., and the assignor did not care if he did that position or not.

It was the best match of high school I have refereed in six weeks of the season so far. The play (especially by the away team) was at the highest level. When running down the field, I finally asked the center midfielder what club team she played for because these were not the run of the mill players I typically see playing high school soccer. When she said she plays club in the ECNL (regional/nationally ranked teams) league, I knew this was going to be a great game.

I called maybe (5) fouls. The coaches pretty much remained silent. No cards. It was one of the best nights of soccer in a very long time for me. Even the parents were cheering in a positive fashion for the entire game.

I came off the field elated by that one game. Nothing compares to it when there are so many challenging matches on the books. 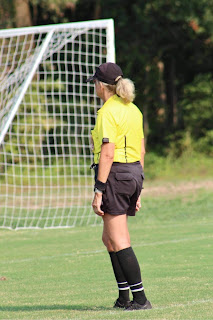