Another Story from: The Lady in the Soccer Suit

This past week I refereed about 9 or 10 games. They tend to run together in my mind unless an incident pulls me out of the soccer trance.

Earlier in the week I refereed two high school JV games in an afternoon; girls, then the boys. The two teams were from neighboring towns/high schools and they were ready to compete. However the home team did not have the caliber of players as their opponent, and it showed from the first whistle. Once the away team had a significant lead, the coach decided to clear his bench and let every kid play in the match. I love when they do that!

Let me digress for a second regarding a first. A first kiss, a first pet, a first communion, a first loss of someone close. You get the picture. That game there was a first goal in soccer for one young man on the away team. His proudly wore the #12. He had about one chance with the ball and took it seriously enough to launch it over the keeper’s hands and into the back of the net.

Screams of excitement erupted from every member of the goal scorer's team. Even the coach was jumping around and high fiving all his players. I did not understand what all the hullabaloo was about until the coach came up to me and said that #12 just scored his very first goal in soccer—EVER! He then went on to add that this kid has played since he was 5, and never scored until that very moment on the pitch that I also witnessed.

What a treat! What a pleasure. I even high fived/fist pumped him when he was summoned off the field during a substitution. This kid, deservingly so, was on a complete soccer high, surrounded by his teammates that were equally happy for him. 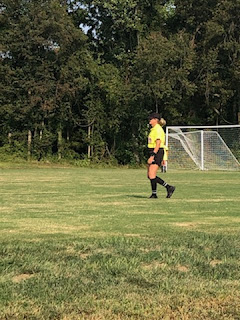