Over the past few weeks I have been tuning into watching PBS's Masterpiece Classic "Downton Abbey". It's a terrific series set in England beginning with the sinking of the Titanic in April of 1912. I heard about this show from various folks and finally googled it to see what it was all about and started watching with serious intrigue.

I love everything about it from the great clothing or fashions from that time period to the romance, scandal, heartbreak and betrayal. Thankfully, I was able to watch the entire first season on Netflix. Since no one was offering the second season for free (except watching it on PBS at times I could not tune in) I bit the bullet and bought the second season which I'm half way through right now. I'm trying to finish the season to be ready for the third season starting in January 2013! Watching this though has seriously put a dent into my reading time!!!

My photo is the long shadows of the fall with Lucky and Lucy.

BSoleille! The bright side of a British television series. 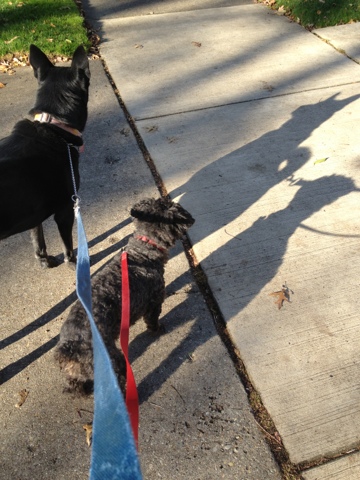 I will see the long shadows in 2 days!!