Throwback Thursday with a Dog Face Only a Mother Could Love - Wally!

After three decades of "owning" dogs, our Loo-C was the last to go 18 months ago. This evening, while walking past one of our bookcases, I stopped at this photo of Wally, our beloved dog who lived almost to age 18! We got him as a puppy at a 5K race near our home in Ohio in 1990, after a very smart farmer drove over to the race, parked his pick up truck with 10 or so puppies in the flatbed, and hoped for the best with lots of runners going past him after the race.

Much to my husband's chagrin at the time, I asked the farmer questions about the "parents" of the puppies etc., which he answered obligingly. I looked them all over, but Wally sauntered over to me, and I took that as he picked me! I gingerly scooped him up and walked over to our car. It was quite an impulsive move (we both worked full-time), but thankfully, he became a part of the family right quick and truly became an awesome dog to all that ever had the pleasure to play with him and pet him (he loved everybody). I could put in in a down-stay for 5 minutes and he would wait patiently and ran lots of miles with us too.

When I took the photo out of the frame to retake it on my phone, by golly, I turned to the backside and realized that I took this photo exactly 20 years ago today! What is that? Fate? Can that be, really? I did not even think about it before today...hmmm.

BSoleille! The bright side of reminiscing about Wally, AKA Wallyburgers and Wazoo! 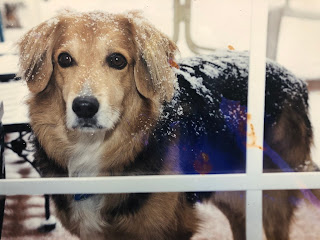