Don't We All Have a Dream?

I hope those who had today off enjoyed it (despite the cold temperatures reported around the country tonight). It's interesting to note that Martin Luther King would have been 91 years old this year, but his legacy of peace and nonviolence resonates today as it did in the early 1960's while trying to establish Civil Rights. And although MLK's tragic assassination was awful for our country, he really left a profound impact on humanity through his ministry, speeches, writings and social justice.

A scholar from a young age, he was inspired by Gandhi and cherished his teachings of nonviolent behavior for all. MLK's deep thinking and writings have left hundreds of quotes that still are relevant today. Besides his most famous "I Have a Dream" speech, here are a couple of my favorite's:

"Love is the only force capable of transforming an enemy into a friend."

"We may all have come on different ships, but we're in the same boat now."

MLK said people could use the fact he was a "drum major" upon his death...he was a drum major for peace and a drum major for justice. Can't we all use a little more if that today in 2020? I think so. 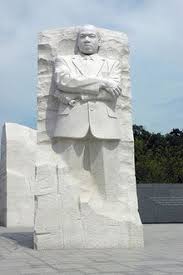