The sisterhood of sewing guilds and sewing/quilting bees goes back generations, and runs deeply amongst those that "know" the power of these small, perhaps, but mighty organizations. Heck, even documentarian Ken Burns knows the power of the needle and thread and the "secret" powers each stitch has on our lives.

Sew, when I met  Susie Stevenson in 1999, she had just gone back to work full-time after raising her family and working as a freelance graphic designer part-time for The Magazine Group (and then retired from TMG a few years ago). We really didn't get to know each other until I joined the Piecemaker Bee (in 2001) as Susie was already a member since 2000. Susie is wicked smart, has tenacity and is the energizer bunny when it comes to anything crafty (her first love was beadwork). But Susie has always sewed since age 5, making yo-yo's (small gathered circles) under the direction of her grandmother, and made all her clothes through high school; all self-taught just by following the pattern.

How about we peek in on Susie from the beginning?

Born and raised in a Baltimore, Maryland, row house, Susie, who will be 70 in March, is a self proclaimed "former hippie." This means nothing really shocks her. She has one sibling, a brother, Steven, who lives in Spain. Her now deceased parents, Margaret and Frank were both musicians and met in New York City as Margaret studied at The Juilliard School (soprano) and Frank sang briefly with the Metropolitan Opera (baritone). He also taught voice lessons in their home, was was a cantor at a reformed synagogue, a soloist for the First Unitarian Church in downtown Baltimore and studied at The Peabody Institute. His voice was heard throughout Baltimore and beyond as he also did work with WBAL and local radio stations in the metro area.

Susie reminisced about her childhood being a typical post-war childhood, but music, glorious music, filled her home and brought a considerable amount of joy as a youth. She reflected that she can carry a tune and read music, but that's it. (She did, however, receive the appreciation of music, and that her brother and both sons got the musical gene). Singing was the number one activity for her family and her large extended family through the years on a daily basis. (If you ever get the chance; ask Susie to share her father's recording of Edelweiss, it will blow you away).

The 60's were quite something, and Susie graduated from high school in 1968, a very tumultuous year historically (assassinations of MLK and RFK in April and June, respectfully). The riots in Baltimore and the rest of the country had the school administrators in an uproar on what to do with proms and graduations, almost canceling these rites of passages for Susie's class.

However, she revealed that she graduated and continued her education at the University of Maryland College Park, graduating in 1972 with a degree in graphic design. She loved math and started out as a math major, but she was just too creative and the switch to graphic design was a great middle ground for her. Of course, the Vietnam war was on everyone's mind, especially on a college campus 20 miles from Washington D.C., and many protest broke out on campus, including a scary moment when Susie was tear-gassed on Route 1 in College Park while her boyfriend at the time, Jim (now husband), was fighting in Vietnam.

Interestingly, Susie, who met Jim her sophomore year at Maryland, began writing letters to Jim once he was called up to the Army, then Vietnam soon after. Believe it or not, she wrote to him for exactly one year, that's 365 letters and never missed a day (Jim received every letter by the way)! I don't know what's more remarkable? The letter writing each day, or the fact Susie's letters reached Jim a half world away?

As Jim was a little busy with the war, he could not write on a daily basis, but once home, they were engaged, then married on September 28, 1974. After their nuptials, they moved to Silver Spring, Maryland, and eventually bought a house and raised their family in Bowie, Maryland. They have three children; Matt, 40; Scott, 38; and Maggie, 37; and five grandchildren: Everleigh, Kendall, McKenna, Clark and Logan. They are the light of Susie's life! Susie, as you can imagine, was a very involved parent on many levels; PTA president, campaigner for school board elections, into city politics, and taught foreign adoption classes (Maggie was adopted from Korea).

Once the kids entered college and were more adults than kids, she was able to return to full-time employment and reacquaint herself with her crafting skills. Susie's first quilt class was at JoAnn Fabrics (in Bowie) with Margy Hill as her first teacher. Susie admitted that she "got bit by the quilting bug very quickly," and, thankfully, never looked back.

Susie then joined the Southern Comforters Quilt Guild and became a viable member by volunteering (behind the scenes) of the yearly quilt show, the yearly Bingo (she's the curator of the quilts); Block of the Month programs when we had them; and education of quilting and sewing on many levels.

This blue loving gal loves the most complicated patterns, and it certainly showed as she has won the most "Best in Show" Ribbons with three of her quilts since she's been a member! She added that the more math and complex patterns that are out there, the better. However, her favorite part of quilting, besides fabric selections and new techniques, is the friendships she has made over the last 20 years. Looking back, she mentioned that it's the sisterhood of the fabric and the encouragement we give each other every step of the way that brings her the most delight. I couldn't agree more!

In addition to the complexity of her quilts, she claimed that she's entered a 'new style' with scrap quilts. Not one to follow rules....ahem...she does not like the chaotic look, but more "planned random." (I swear Susie coined that term). However, much to everyone's satisfaction, Susie's knack with difficult patterns allows her to share her knowledge with a much more efficient and effective ways to cut and sew on just about any pattern on the market today. (She loves all the math that goes into it!)

Personally, she has some vintage quilts that are her pride and joy, made by her great/great grandmother dating back to 1843, 1888 and then one from the 1930's. Treasures for sure, not only a quilter!

Most recently (summer of 2019), Susie got into the world of Long-Arm quilting by purchasing a second-hand Handi-Quilter 16 from a local woman. She is now feeling more confident in her skills and beginning to love it (I was thankful to be a part of her decision in looking at it/buying it).

In closing, this "big sister" of mine has hyper-hearing (from all that musical "training" from a young age), has a potty mouth (remember she's an "old" hippie), and loves her family to "pieces." She loves to "break the rules" in the sewing world, and is a force to be reckoned with with each stitch, pattern and quilt she makes!

BSoleille! The bright side of #CelebratingOthers with Quilter Extraordinaire Susie Stevenson!

Photos are from Susie Stevenson archives. Just below is Susie with "Blue Jay," her pride and joy! 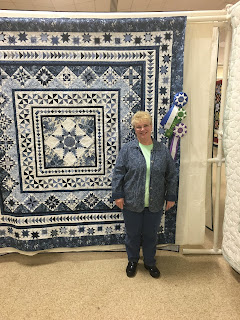