The Threads of Life...

As a quilter, there are a lot of tools of the trade, with a sewing machine one of the biggest things to own. Now, sure, there are still a few hold-outs on owning a machine and therefore hand sew, but by and large most sewists own at least one machine (many have several...).

However, besides irons and scissors, and sewing machines, thread is the next "best" thing. I happen to carry a large bag of ROY G BIV threads (always take on retreat), but the last few times I dug into it to get a specific color, a cacophony of thread (like thread throw up) was all disheveled. I couldn't take it another minute so I dumped a large bag right at the foot of my sewing space and "reorganized" the thread by color(s). Now I have this large bag contained with smaller bags of like colors and I hope that will be good enough for sewing throughout 2020 and beyond... 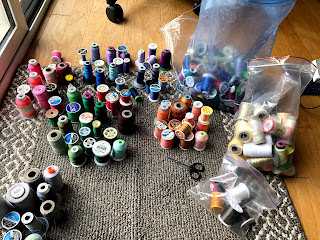