The journey of men into the "traditional" women's quilting world is rapidly gaining popularity by men of all ages, trades, occupations and creative levels. It's no longer a "women's" hobby, as some of the top quilters who enter competitive quilt shows are men. When I joined the Southern Comforters over 20 years ago in Bowie, Maryland, there was one man in the guild, Father Ray. He enjoyed some quilting, but his love was crewel and embroidery, but he wanted to be a part of a fiber artist group, and the SoCo was the closest thing he had to join for the fiber education and camaraderie of like-minded folks. We've lost touch with him as he moved on to another location but wished him well.

In fact, for my husband's 60th Birthday in 2018, quilting lessons by yours truly was one of his gifts.

Sew...let me start with the love story of Frank and Rita and their quilting journey. Rita began quilting in 2005 because two of her sisters quilted, Dorothy and Kathleen, and those two belonged to the guild. Since Rita did not drive much, Frank would bring her to the meetings and hung around in the back of the hall listening in, learning and enjoying the show-n-tell (he was always welcome!) instead of driving home and coming right back in less than two hours.

Frank disclosed that Rita had several quilts going on at the same time (a true quilter for sure), and had started a quilt for their daughter's wedding in 2011, and a quilt for Frank. Unfortunately, she never got to finish either of them before she passed away in 2012. However, all those meetings must have paid off for Frank who had the fortitude to tackle those quilts and finish them in Rita's memory. Frank even used Rita's DSM (Domestic Sewing Machine) to finish all the piecing work, and then bought an Handi-Quilter Avante Long-Arm Machine with a Pro-Stitcher (I have the same one) to machine quilt every UFO (Unfinished Objects) in Rita's stash. Love for sure!

Let me share a bit about Frank before I dish on about his modern day quilts, pottery and woodworking skills...(he's a busy guy).

Frank, 69, was the only boy born to Frank Sr. and Charlee in Western New York (Tonawanda), along with three sisters (one has passed away). He graduated in 1968 from North Tonawanda High School and continued his education in Electrical Engineering in a Co-op program beginning at Niagara University and then graduating with a BEE from the University of Detroit. As the Vietnam War was in full swing by the time he graduated, Frank disclosed that his draft number was so high that he never got called to head to boot camp, or to Vietnam.

Instead, Frank got a government job in 1973, moved to Silver Spring, Maryland, and began working for the Navy in Science Technology in White Oak, Maryland. While working there, Frank returned to school at the University of Maryland and earned a Master's Degree in Electrical Engineering, which delightedly, advanced his career as a Branch Head. Not one to shy away from more education, Frank decided to go to Johns Hopkins University and earned a Master's  Degree in Computer Science  in 1984. He then left the Navy job in 2000 and moved to the Missile Defense Agency (near the Pentagon) where he worked with small business contractors for the next five years until his full retirement in 2005.

Personally, Frank met Rita in 1980 at a church mixer in Greenbelt, Maryland. They married in 1984 and adopted their daughter, Katherine (Katie) in 1988. When Katie got married in 2011 (and has two children now, 6 and 3), it was the last big event Rita was able to go to despite her health condition but loved every minute of it! As a side note; Rita continued to go on our quilt retreats even when her health was deteriorating quickly. Frank was very sweet to drive her to camp, set up her sewing machine and all her supplies/food/oxygen tank(s), made her bed, then bid Rita adieu with a kiss until he returned a few days later to reverse that order. Rita was delighted and so were we on what a sweet guy Frank really is, right?

Frank then mentioned that he "officially" became a member of the Southern Comforters in 2010, but did not enter any quilts in our shows until a few years later.

By 2014, Frank found love again and got married to a lovely woman named Virginia. They currently live in Bowie, Maryland, and share seven grandchildren between them. He said losing Rita was devastating, as one can imagine, but Virginia has make a remarkable difference and they are very happy together.

This blue loving guy who's a great story teller and super creative loves to work with his hands. Not only does he love quilting, but loves pottery as well. He mentioned that he and Rita took a class 20 years ago, but he got back to it in 2012 by taking collegiate classes at Prince George's County Community College in Largo, Maryland. He expressed to me that he loves the soothing feel of the clay on his hands as he works with it along with it being another creative outlet. He brings joy to those who happen to be a recipient of one of his mugs...his favorite thing to make. I'm happy to report Frank gave me one a couple of years ago that NO ONE in my household can use except me...it's my favorite!

In addition to quilting and pottery, Frank also likes to dabble in woodworking and home repairs. He admitted that he doesn't get to the woodworking as much these days, but certainly has done a lot of home repairs and updating to his and Virginia's delight.

And lastly, this very humble guy has done an amazing job with his quilting skills and is a sure fire award winner at our shows during the last several years. He's not only finished Rita's quilts, but also finished a very sentimental UFO quilt for his sister-in-law, Dorothy, who passed away in 2016, to the surprise to Dorothy's family (they were very appreciative!).

Frank's mission and focus in life has always been his family and the happiness he can bestow on his wife, Virginia, his daughter, Katie, and his grandchildren. They are all the light of his life! 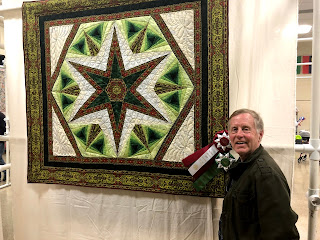