A Black and White Snowstorm

Our quick snowfall in the Mid Atlantic had the entire area covered in a couple of hours yesterday. It clung mostly to the trees, grass and greenery, thankfully. There were a few icy patches (driveways), but the warm weather today melted most away.

While the snow was falling, I looked out the windows from the start and everything seemed like it was not in technicolor any longer, rather, it looked liked the scene was set in black and white film as  the sky had no color and everything coming down from it happened to be big white juicy snowflakes.

I "hurried" outside to capture this photo of a fairly small Japanese Maple that's near our front door that looked quite stunning draped in the heavy snow. 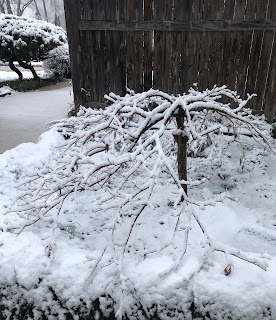