I would like to end the week on a positive note regarding my son, Ryan. Thankfully, he is feeling better with his healing neck and gaining strength each day. He felt so good today that he wanted to "organize" his sports jerseys from basketball to baseball to football to hockey, as he likes to wear the jersey that fits his mood for the day, or maybe that "his" team won a decisive game recently (like in the last day or so!).  If a favorite team/player is playing, he will wear that jersey to cheer on that team or player. And because he is such a sport nut, he enjoys learning and knowing the stats on the players, teams, owners and managers from across the nation covering NBA, MLB, NFL, NHL, college hoops/football and the EPL (English Premier League) too.

He is an equal opportunity sports fanatic, and truly very knowledgeable about anything that has to do with a ball (football, baseball, soccer, basketball), stick, puck and hoops. He has even predicted the outcomes of Superbowls fairly early in the season (even predicting the final scores!), along with selecting the NCAA College Hoop Champion, and, most recently, bet $10 in Las Vegas in August of 2015 (before the NBA season started) that the Cleveland Cavaliers would win the 2016 NBA title, and they did. His winnings....$32!

BSoleille! The bright side of being a "student of sport".

Photo of Ryan and his colorful jerseys from "around the leagues". 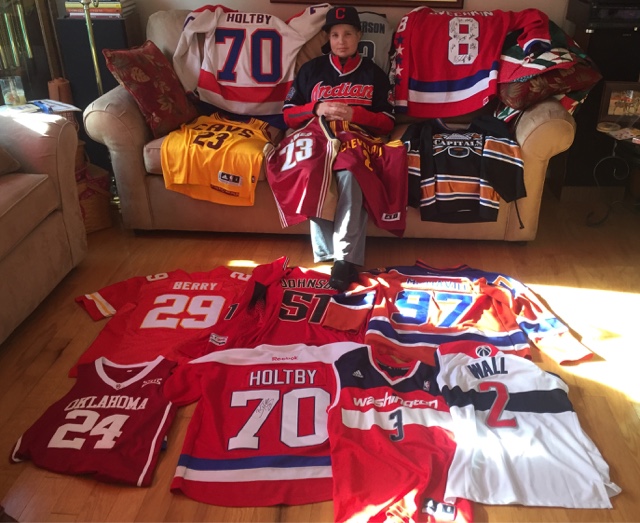