Heading into our son Ryan's third surgery in seven months for squamous cell carcinoma and add ons (like today's lymph node removal on the left side of his neck) this morning, our emotions have definitely been put through the paces. In fact, maybe a wee bit in uncharted territory to be honest. But  our family, and more specifically, Ryan, most thankfully, stands tall before you, an army of prayer warriors, with remarkable family, friends, and medical teams to give this one young man hope and inspiration to keep marching on. One. Day. At. A. Time. We cannot thank you enough!

Surgically, Dr. Ord was optimistic concerning the lymph nodes, but the pathology report takes 7-10 days to return and is a very key component  in this entire process. Scar tissue from his previous surgeries complicated the matter, but the surgical team was able to work around these "formations", and that in itself is a deserved sigh of relief. Ryan, believe it or not, is considered one tough soldier on this battle front as stated such by his medical teams and those that know him well. He is like an elite athlete that never gives up on the prize; but for him, it's his return to good health and his life. We could not be prouder in his fortitude and focus.

So what does this all mean, really? Heck, I really don't know. But I do know that living a full life is simple: be kind, have gratitude, take advantage of "golden" oppurtunies, and lastly, live and love fiercely...you won't regret it!!

This evening we are finally ensconced on the medical floor where there is a whole bunch of healing and recovery going on. We hope for a "good night" of rest and thankful that this is now in the rear view mirror. Looking forward to brighter days ahead with good medical reports!

BSoleille! The "bright" side of humbleness in the face of adversity with many cheering us on from the near and far "sidelines"!

Photo of Ryan actually hungry and eating hospital food! A first! And it's not bacon or French fries.... 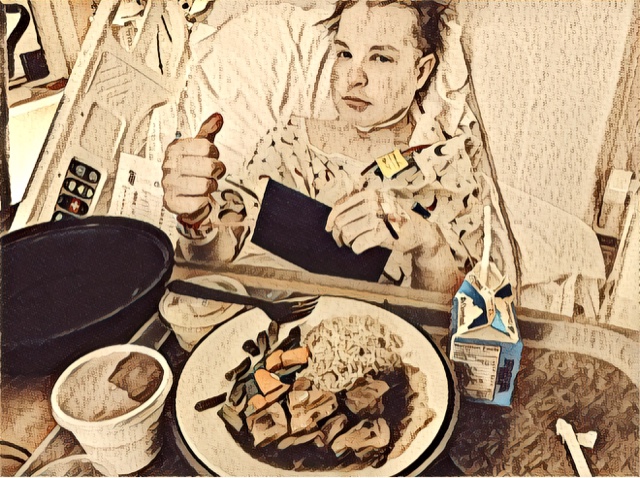