What's the Oddest Thing Seen on an Airport Carousel?

It seems like many people around the USA are "moving about the cabin" once again. I am thrilled and chomping at the bit to not only drive places, but fly too.  A friend of mine posted that she and her husband were a few minutes late to their gate to take their carry on bags onto the airplane. They are seasoned travelers, and are relearning the ropes of travel in the summer of 2021. I guess the cabin of the plane was filled up with other passengers baggage.

It got me thinking about seeing long airport corridors filled with passengers and baggage. With millions of people with the travel bug, one sees all kinds of stuff, including what's added or comes off an airport baggage carousel. While traveling in an African country, I witnessed an interesting set of bags. They were  counted as someone's luggage: three bags of potatoes. I'm pretty sure they could have taken the smallish plastic grocery bags (tied) with smallish potatoes onto the plane with them. As far as I know, potatoes are not contraband. No judgment from me, just curiosity. Those potatoes looked odd and lonely as they made their way into the plane's belly.

I'd be curious to hear what other travelers have seen as interesting luggage. I'm not counting golf clubs, skiis or athletic equipment like pole vault poles. I did see a box fan once going into the belly of the plane with its owners sitting in front of me and giddy that it was being loaded. They were super friendly and I asked them about their boxed fan (in a beat up box, mind you). They laughed and said they travel around the world with the same box fan for white noise. They never leave home without it. 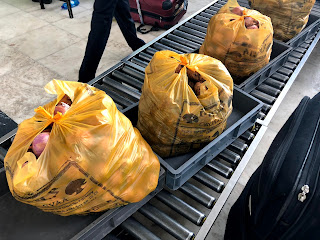