A few hours on the road on Thursday, Bill realized he forgot to pack a dress shirt.

So, never one to back down on a shopping challenge, we were on the hunt for a replacement shirt the last two days. The Costco in Edison, NJ, had zero men's dress shirts oddly enough (or is it odd? since not too many were wearing them in the last year and a half). Near our hotel in Riverhead NY, there are Tanger Outlets right across the street from the hotel. Bingo! we were in business, or so we thought. We did find one at Van Heusen that Bill purchased, but he was still not satisfied with the color to coordinate the ties he did pack (and he's not that picky).

Once we left the outlets, Bill suggested that we should buy gas. I typed in gas on my phone and lo and behold a Costco popped up that was a mile away. We were back to Costco, this time way out on Long Island. Guess what? They did have dress shirts and Bill found his size and color to coordinate with one of the ties he had. A quick lunch with a slice of pizza each made our morning/early afternoon a win-win!

Now...all dressed and my blogpost done, I am/we are ready to celebrate the McCarthy/Favuzza Wedding! And Best Wishes to Bridget Franek and Gabe getting married today in Eugene, Oregon! 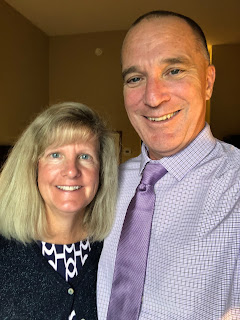