Flushing Out A Car Story '73 Maverick

If you are a reader of this blog, I thank you from the bottom of my heart. I am thinking that when I am done with my 3000 post by years' end, I maybe switching it to a new format, perhaps a new name. There are a lot of ideas swirling in my head, but I can tell you that I will continue to write, no matter where it ends up. Those reading here will know first!

So here goes a story I am working regarding a car I drove in college. It's not perfect, but still working on it. Thanks for your patience!

Way back in the day, during the first two years of university, I didn’t have a car. Not many kids did unless they lived out of state, or their parents were generous enough in buying their son or daughter a set of wheels—not necessarily new. This was in the early 1980’s. My dad thought he was cute when he bought me an old bicycle that was painted red -EVERYWHERE.

The wheels, handlebars, spokes, seat, any other metal, plus the body, was painted fire engine red. It was a sight to behold. I never had to lock it because no one would be caught dead riding it, even for kicks or a minute! When I was finished with all the jokes and barbs of riding it around campus, I took it out to the train tracks to be run over by the next passing train. Hey, I was goofy and in college and that’s the kind of thing kids did then.

After I moved off campus to an apartment with three other roommates (Buff on Clough - Buff was the name of the apartment building and Clough rhymes with Buff. I used to like to say, “In the Buff on Clough…), my dad bought me a car. Now this was no ordinary car. It was a 1973 beat up Maverick with a landau top (does anyone remember those-they were vinyl or cloth instead of metal?). The driver’s side did not open. I had to exit the vehicle through the passenger door. It had “Let’s Party” written on the driver’s side panel, but was spray painted over though the words still seeped through the spray paint and still could be read - especially from a distance. It had an extra long tail pipe because the shorter one was dumping obnoxious fumes into the body of the car. No one could put their feet down on the carpeting in the back seat directly behind the driver because there was some type of gooey oil all over it. However, except for the oil on that side of the car, the backseat was in pristine condition.

Photo of my roommate Jen with Mav 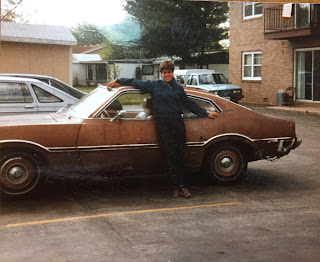