Social Media Connections for the Taking...

With the advent of social media, apps to streamline the process, and people willing to meet people all over the world (including an informal "vetting" process), hubby Bill and I met a couple of social media and marketing gurus yesterday in Bowie, Maryland: Leyni and Chad Illa-Petersen from Houston, Texas. They are in the midst of a whirlwind driving tour of the Eastern part of the USA, including a stop in the Washington, D. C. Metro Area. When Bill noted on Chad's Facebook page and saw that they were at the Lincoln Memorial, a message was sent out wondering if Chad and Leyni would/could meet us in Maryland. Chad quickly responded and a lunch date was set for Friday at 12:30pm (yesterday).

The lunch "hour" went briskly by, with the four of us engaged in interesting conversation about a lot of topics. Interestingly, Leyni has her own business in hand-painted gifts, canvases and wearables, including the painting of shoes. Yes, shoes, and they are so cool and fantastic! We engaged each other on the creative end of quilting and the painted shoe. Bill and Chad talked fast and furious on the whole enchilada of social media and what value it brings individuals, and more importantly, to small and large corporations everywhere.

Check them out if you have the chance!

BSolielle! The bright side of meeting genuine folks IRL (In Real Time)! 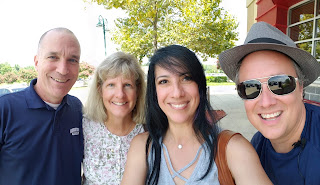