One of the coolest things about visiting Ethiopia is that you can be eight years younger while there! You see, they follow the Ethiopian (Coptic) Calendar where there is a seven to eight year gap from "our" traditional Gregorian Calendar. So when I interviewed my guide in Lalibela, Mulugeta Fentaw (Mulu), he got confused on telling me his "real" age and birthdate thinking I may not understand the calendar discrepancy. When he maintained he was 31 and born in 1980, he must have saw the confusion on my face because I figured, of course, 1987. We laughed about discussing the "apples and oranges" of the two calendars.

Lalibela is in the northern part of Ethiopia, and that is where Mulu, his four brothers and two sisters were raised by their hard-working parents. Mulu is still single because he wants to pursue some of his dreams before settling down. They include travels to Europe and the USA, obtaining a driver's license and car, and finish building a home (in-process) in the Lalibela valley. It can be a difficult path to obtain the items on his 'wish list', but if anyone can do it in Ethiopia, I know Mulu can; he's got the desire and smarts to reach his goals for sure!

Mulu was educated for the primary grades in Lalibela, then furthered his education at the Lalibela College of TVT (Tech Vocational Training) where he pursued a three year program as a Tour Guide for the twelve Lalibela Rock-Hewn Churches and the history attached to each one. In addition to the guide training, he also went to Axum University and studied in the College of Business and Economics, graduating with high marks in 2009. After graduation he moved back to Lalibela to become a full-fledged guide and help with Ethiopian Tourism where he remains in a pool of guides servicing all the hotels in Lalibela. In addition to his education, he has studied languages on his own and feels that he is fluent in English and German; plus his native languages Amharic and G'eez (church language).

Lastly, this green-loving young man is inspired by his Orthodox Christianity and meeting people from all over the world. He truly enjoys sharing his knowledge and cultural history of his hometown

of Lalibela and all of Ethiopia, so if you plan on visiting the area, please do not hesitate to look him up on TripAdvisor and using his guide services. He's funny, articulate, interested in all different kinds of peoples and keeps a lot of the information of the churches palpable and understandable. 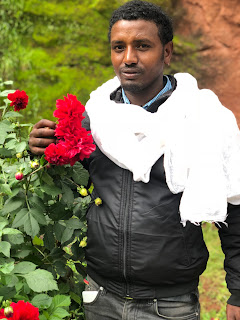 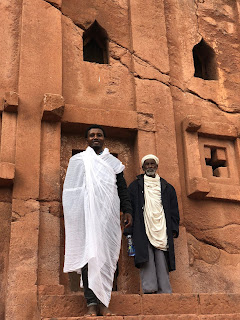