It's hard to believe that the United States officially declared the first Monday in September a federal holiday in 1894. Thirty states thought it was a good idea to celebrate the festival of workers which coincided with the "unofficial" end of summer. Kind of a last hurrah before everyone gets "serious" about work and school going back to session. If nothing else, hard-working people in all walks of life and jobs need, and deserve, a long weekend to rest and have fun with family and friends, maybe even some co-workers. So it goes without saying, though I am going to, that I hope everyone had a nice holiday weekend no matter what you spent your time doing. Personally, I am not going to say goodbye to summer yet...maybe never, because I like to manufacture sunshine and summer all year long at least in my head and always in my heart.

I have posted in the past that September is like a the "new year"; the tipping point being the beginning of a new school year and the goings-on that surround all that. I hope it is a good one for the 2017-2018 calendar year!

I love this photo because it truly captures those bygone "day" laborers that this holiday was instituted for 123 years ago. Those men and women built this country with their grit and sweat equity, and I am thankful we still honor the millions of workers around this great land today. 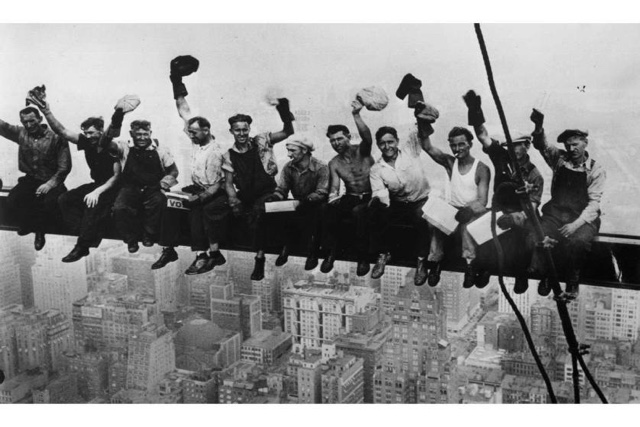