The March of the Ants

It's that time of year again with the "march of the ants", coming into our house at the exact same place(s) year in and year out. I think it's their ritual to come in and be seen, no matter how annoying they are to us! We do not use any type of professional bug exterminator at this point, but I do put those Tarro trays on the kitchen windowsill and watch them go to town on the "sugar", er poison, and hope they eat enough to take it back to their colony to infect the others....but I am not sure how that all works out because the next morning, a new slew of them are eating out of the tray once again. A revolving door, if you will.

So, what good are they, really? Those that invade our homes are truly on some type of mission and do not "know" how annoying they are, at least to me. As kids we watched them work through the sand and dirt around our play areas, but as a homeowner, I am not so keen on them today. The silver lining is that we are bigger then them!

I looked up some facts on ants that placated me a wee bit, but this information does not help me get over their yearly ritual no matter how I try. But I will admit, they are industrious and complex, and, according to all the info I've read lately, will be back next year...and the next, until the end of time.

According to Wikipedia, here are some facts that make them interesting creatures:

"Ants have colonized almost every landmass on Earth. The only places lacking indigenous ants are Antarctica and a few remote or inhospitable islands. Ants thrive in most ecosystems and may form 15–25% of the terrestrial animal biomass. Their success in so many environments has been attributed to their social organization and their ability to modify habitats, tap resources, and defend themselves. Their long co-evolution with other species has led to mimetic, commensal, parasitic, and mutualistic relationships." 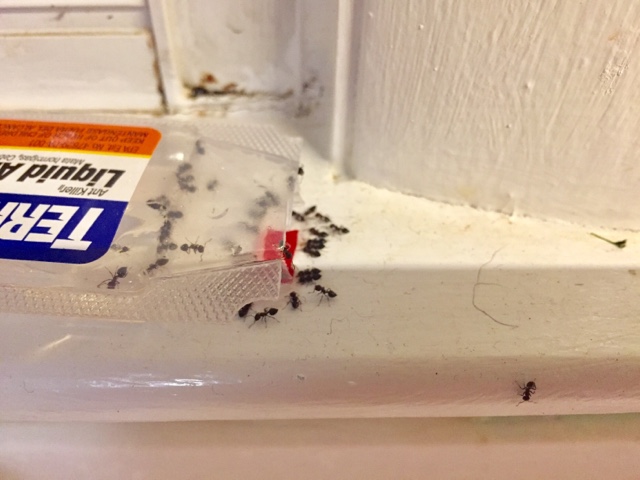 I agree with you they are a nuisance but I have Bill spray the outside of the house and that seems to help.