Patty was a force to be reckoned with back in junior high and high school, and she is no different today. She was fast as lightning, and took that speed to the track and around Northeast Ohio winning races in the shorter distances - 100m and 200m dashes, much to her delight (and ours as teammates) along with our high school track coach, Jim Zickes. She continues her winning ways with her family and friends, and has resided in Florida for that past 40 years. It was an honor to catch up with her (remember, she's fast!) and I hope you will enjoy her story!

Per Patty's "instructions," I must start out her story like this: "From the projects to living on an island."

That is no joke, because Patty revealed she had a chaotic childhood beginning with being born in 1962 to a single mom (her dad left her while pregnant with Patty), and that she also had two other small children; her brother Paul (age 62) and her down syndrome brother, Mark, who died in 2016 at the age of 56 due to kidney failure. When her mom married her step dad, they had one son together, Timmy (age 56). They were all born and raised on the Southside of Cleveland where Patty and her brothers attended Tremont Elementary School until she was in the 4th grade. When her mom got into a serious car accident and was awarded a settlement, she moved the family to Dawning Avenue and life, and their hearts, were lifted in  owning their own home.

During our conversation we realized that we both worked on the Cleveland playgrounds, Patty at Dawning ES; Harper ES and Lowe Pool, and me at Plymouth Park. She also earned some extra spending cash by cleaning the inside of Benjamin Franklin ES. She said she loved working on the playgrounds, and I felt the same way! We both ran summer programs for all sports, especially 'begging' the neighborhood kids we worked with to run in tracks meets put on the city. The summers went by super fast while enjoying every minute of those bygone days.

A self-proclaimed "party girl" and concert-goer by the time we got to high school, she loved going to see all the big rock and roll bands of the day; Pink Floyd, Aerosmith, REO Speedwagon, Rolling Stones and Bruce Springsteen, mostly with her best friend at that time, Marlene Federico (who passed away several years ago.)

While at Rhodes, Patty was enrolled in the O.W. E. program, and only came to school for the early part of the day so she could get to her job placement in that program. She did get to track practice most days, and, of course, breaking records at the meets! Patty also mentioned that in 10th grade, she met Jesse Messer, who moved to Cleveland from Pine Island, Florida, and only went to Rhodes for that one year (never graduated) and moved back to Pine Island.

After graduation in July of 1980 (we graduated late due to a teacher's strike the previous fall); Patty received a full track scholarship to Tri-C (Cuyahoga Community College), but only stayed two months. College life (even at the local level) was not for Patty. So on a wing and a prayer, she moved to Pine Island, Florida (with her mother's blessing), with another Rhodian, Yvonne Sherlock, because she knew Jesse went back to Florida and loved it there, so why wouldn't she like it was her thought.

All three rented a house together at first, but subsequently moved on after a short while. Patty noted she worked odd jobs and bartended at night, and met the love of her life in 1982 - Dan Holloway on the baseball/softball fields on Pine Island. Dan's a commercial fisherman and actually a fourth generation fisherman and loves the water and everything about it. (I need to fish with him!)

Since Patty does things her own way (it's a good thing!); their son Dan was born on 8/20/83. And you know how gifted Patty is in the sports realm? Well, her kids do not fall from the tree, and all three of her children went to play ball, on full scholarships, mind you earning their degrees! Dan played ball at King University (DIV2) in Bristol, TN, and majored in History and Teaching. He's married, lives near Patty, and has three children: Danika, age 11; Camden, age 8 and Leo, 6 weeks old.

Their daughter Rachel was born 3/7/86, and is also a teacher in Physical Education and has one son, Brody, age 10. Rachel played softball at Warner Southern (DIV2) in Lake Wales, FL, and suffered many injuries while playing ball. But she's tough, and worked through them to continue to play.

Hannah, born 9/7/2000, is Patty and Dan's third child; Patty laughed and stated they took 14 years off in the childbearing and rearing stages to have her. Hannah is currently on scholarship playing softball at Georgia Southwestern (DIV2) and majoring in History and English. She's thinking of being a teacher too, but has some time to decide. Patty then sheepishly stated that Hannah's softball coaches in her area "cobbled" together a super squad of softball players from Florida in 2016 and, doggone it, if they didn't WIN the Little League World Series that year!! Hannah played second base and scored the winning run to beat Canada in the Championship game! That is sooooo coooolll!! Congratulations are due even four years later!

Patty gushed when she told me she has good kids, and I could tell she was smiling and feels s0 proud of all of them. She has good reason, right?

And it was this terrific family, and her husband, Dan, who nursed Patty back to "her old self" after fighting Stage 4 Colon Cancer. This girl, woman, wife, mother and friend to many was diagnosed with her cancer after claiming she had an annoying backache. It was chalked up at first as an UTI, but antibiotics were definitely not helping her situation.  When she went back to the hospital, she knew she needed a CT scan, but that "just" revealed she was "bound up" and sent home with other meds that did not work to ease her symptoms.

The very next day, in pain, she called for a colonoscopy appointment, and the results were off handedly revealed to her, much to her surprise. She claimed that "she's never been sick a day in her life" - I believe her.

There are silver linings in Patty's treatment, which she called "12 rounds of shit," in that, her brother-in-law worked for the Cape Coral Hospital and knew just the right doctor/surgeon to help Patty; Dr. Pendaconda. He removed the offending cancer and then some...ahem, and saved Patty's life. Patty was not keen on having a colonoscopy bag for one year, but she reluctantly went along with the program because she believed in her doctor explicitly. A year later and after her 12 rounds of IV chemo, her doctor reversed the bag and she now lives "bag-free." When I asked Patty what her motivation was that kept her going, she quickly said she "fought for her life at every turn." She was never scared and somehow knew that she was going to recover and live and see her kids and grandkids grow up.

And now; for my "lightning" round of questions: Patty's favorite color is blue, and all her kids (and now grandkids) wear or wore the number 12 on their uniforms, unless 12 was taken, and then they'd choose 2.

Her no fail motivational song is LA Woman by the Doors, and also, nostalgically, God Bless America. Patty's guilty pleasure is a glass of white zinfandel wine that she loves to share with her husband Dan, who happens to be the the single most person that changed her life (her mom, now deceased, is a very close second.) She added her kids and grandkids are what makes her tick and her greatest gifts in life, and her favorite place on Earth is Pine Island, Florida (and Cleveland when she visits!)

This would come as no surprise that Patty's superpower is sports - all of them. She noted that she is "hard-headed" and takes after her mom that way, and that's why she is/was so good in all sporting endeavors, and from the looks of it, passed that down to her own kids.

The most beloved item she own is her boat (she can place up to 200 crab pots by herself); considers the Shawshank Redemption her favorite move; would still love to zipline on the highest peak, and still gets butterflies any time her kids or grandkids pitch or bat. She knows...that sports keep kids out of trouble and life is more fun that way! I couldn't agree more! 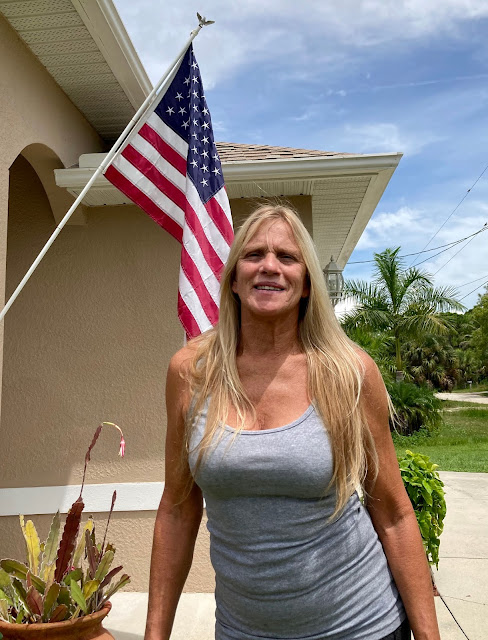 What a Beautiful story and person Patty has always been dedicated to all she ever did and does fun-loving fun filled friend!!! God Blessed the world when Patty came to us!!! Keep on keeping on you Beautiful Angel!!!