An off the beaten path hike, mostly used by the locals, was too intriguing for four people who love to hike to not pass it up (no markings whatsoever/no signage for trailhead.) However, as the daylight started to fade, and the treacherous rock scrambles ensued due to cascading water right from the start, it certainly seemed like a very ambitious endeavor at that moment in time. However, despite all the above, we carried on with the adventure with elation.
Please note: this hike was named due to the one hour of sunlight in this narrow canyon of rock, but there is "plenty" of light to get a hike in nonetheless.
While "fearless leader" Mark Misencik scrambled quite effortlessly across the rock and up a rickety old ladder that helped get up to the next big boulder, husband Bill was not so nimble for his turn up the ladder and fell quite hard, twisting his body landing flat on his back (and a few scrapes to his arm.) Being a few yards away, I couldn't help his fall, but said, "I should have been the second one up the ladder." Linda then quipped, "it's time to end this hike we just started." Mark was called down from his perch above, but could barely hear us from the loud sound of the running water in various places on the rocks.
Thankfully, we all reconvened at the bottom safely; and maybe, just maybe, we will try that hike again...someday. http://www.blackhillsthehike.com/eleventh-hour/
BSoleille! The bright side of knowing when to say when...
Terri 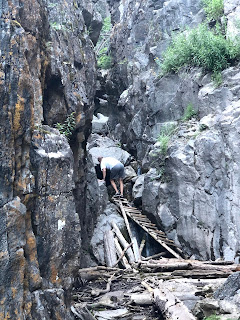 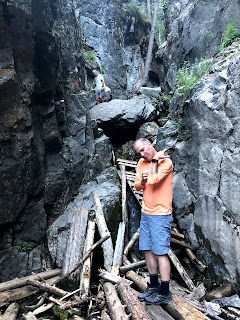 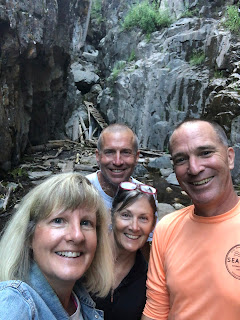 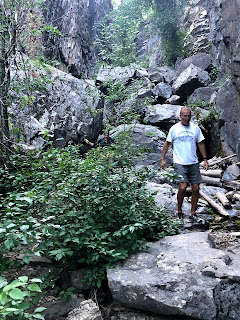