Sunday "Serenade" at the Soccer Field

Typically, there is no music at a soccer match in travel/club play. Maybe some pre-game warm up every now and again, but really not much at all. Interestingly, the past two days I was met with music throughout various matches. Yesterday, there was a Little League Tournament next to the soccer field, and they had an announcer and played lots of music between innings and at the end of the games. Good music too and I had to refrain from dancing on a few occasions! For games that do not require as much concentration as other fast paced games may, the music was a welcome reprieve. I'm not sure if it affected the players, as they all seemed to play very well.

This morning, a Dad from one of the teams brought his guitar and played through the entire match. He wasn't loud (and did not sing, though I did ask him if he was about to start and he said "no", although mentioned he used to sing in a band...). However, his acoustic guitar playing music was sweet and I enjoyed it immensely. Thankfully, I do not think the players even heard any of it (I was AR or Assistant Referee so I was on the parents sideline for this game), and the game played out beautifully with no incident.

BSoleille! The bright side of music at the matches! 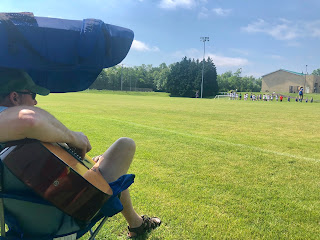