In a "last minute" call this past Friday, family friend Bill Gawne pulled the coup of all coups, coming up with two tickets to ESPN's ESPY awards this Wednesday, July 12th, in Los Angeles, California!

The "backstory" is when Ryan battled his new tongue cancers and surgeries (May 2016; Dec. 2016; and Jan. 2017), he mentioned, ever so casually, that one of his wishes, if and when he comes out of all this craziness, is to attend an ESPY award ceremony. I know what you are thinking...a naive kid with a big dream that is nearly impossible to attend, and I hear you loud and clear. But as I milled the thought around in my head for a bit, and know first hand how Ryan has courageously battled all five cancers with more focus, drive and passion than any professional athlete that attends this show, I had to at least ask...and I did.

"Feelers" went out early in the year after his last surgery in January, but because it was such a longshot, we forgot all about it until the unexpected call came this past Friday from Bill Gawne. He was so giddy with excitement that, not only was the offer for two tickets to attend the Awards, but also the red carpet parade and the After Party - as are all part of the "package"! We were squealing with delight (Ryan and I were driving through Kentucky) when the call came in. The next call was to Bill Tomoff, and the "coin toss" of who was to accompany Ryan to the event in LA. Of course, I wanted to go, badly, but cooler heads prevailed when I recognized the fact Bill T. dedicated close to 20 years of his career working in sports, and, for him, going to this event is totally fitting. I am thrilled "my guys" will be able to share this very special event from all perspectives of working for, spectating many games and loving sports of all kinds.

Interestingly enough, when the kids were young, we set up on ESPN "booth" in our living room for Ryan to "interview" his soccer playing sister, Olivia, who had just won a big tournament. Donned with sport coat and tie, he was serious as he asked her pertinent questions of her role and her teams' role in winning said tournament. Of course, I had to photograph their ingenuity all those years ago and am glad I did!

My request is for you to try and tune into the show this Wednesday, and if not then, maybe catch some of it afterwards (they tend to show this type of event multiple times on ESPN, or at least I think they do). My hope is to catch a glimpse of Ryan and Bill enjoying their big night on camera...you just never know... 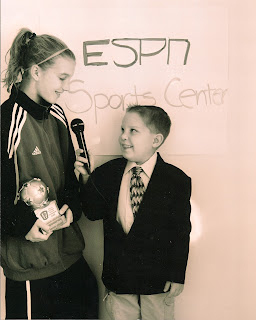 Wonderful post and such a fitting picture! Couldn't be happier for Ryan to have that opportunity! I can't wait to hear all about it from him!

Thank you, Brian! I'm so thankful and giddy for them! And truly thankful for my friends Bill and Colleen Gawne for making the magic happen!!!

That's fabulous ! He must be over the moon with excitement. I will watch in hopes to catch a glimpse of Ryan !

Your stories of Ryan never fail to humble and amaze me! So excited for you all. Sorry you lost the 'coin toss'Terri.

So happy for both Ryan and Bill, will try and watch tonight.