No Turn On Red

My idea for this post came early this morning on my way to Lothian Elementary School in South Anne Arundel County.  While still in Crofton, and at a light that has tight turns when either turning left or right, there is a road sign that perfectly states "No Turn on Red" for this purpose.  I happened to be in the next lane and a car back from two cars sitting in that right hand turn lane.  The first car was obeying the sign and not turning, but the second car kept honking her horn trying to get the first car to turn (and really making a commotion over nothing).  So the first car lady,  instead of turning (when she clearly was not going to),  calmly got out of her vehicle, walked over to the window of the second lady driver, and pointed to the sign directly to her right- "No Turn On Red" and stated she was not going to turn until the light turned green.  I could have hugged her for sticking up for herself, but in today's day and age, I would have sat "patiently in my car and waited for the light to turn green!

Thankfully, everyone got on with their day when that light finally turned green, but that scene stayed with me all day, albeit with a little chuckle.

Photo of downtown Annapolis from summer of 2012 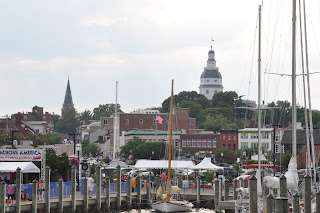