You have heard the stories of long lost class rings thrown out to sea, and miraculously, 50 years later it resurfaces to a shore in some far flung locale, and found by the owner's long lost girlfriend or boyfriend? The proverbial "dark hole", or in the above case, "dark sea" scenario.  So while cleaning up Christmas, and rearranging "stuff" in the garage, I noticed a pair of flip flops (brand new and never worn) that I planned to toss in the Goodwill pile, on top of a file cabinet.  Under the flip flops was a box full of other boxes that fell over, and underneath all that, several gift "certificates" to several Crofton restaurants in perfect condition from August of 1999!  They were placed there by my husband (and won or bid on in the Sue Jaeger Golf Outing) and long forgotten about until today!

So for giggles and grins, I decided to call one of the restaurants and explained that I found one of their gift certificates from August 23, 1999 and would they, or even could they, honor it?  (I did preface this call to the woman who answered the phone that I had a "wacky" question, and she encouraged me to tell her what I've got).  I explained to her the very same story above and she told me to hang on for a minute. And here is the wonderful part of the story, when she returned to the phone she suprisingly said,  "yes", they would honor it and to please make a reservation soon!  Bonanza!  Now that is some awesome customer service!  The restaurant's name is Christopher's located on Rt. 3 near the Dunkin' Donuts/Post Office Plaza, and we will be dining there in the near future for sure.

BSoleille!  The bright side of "cleaning" and finding long lost "good stuff" from that dark hole.
Terri 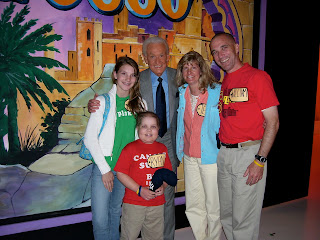 Photo is a blast from the past: May 2006: The family with Bob Barker at the Price is Right in Hollywood, California
Posted by Terri Tomoff at 10:35 PM