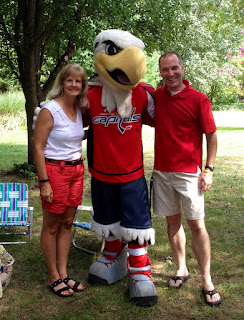 A friend of ours, James Castle, won the "World's Greatest Caps Dad" contest recently. One of his daughter's wrote a great essay on why her Dad deserved this honor. As a season ticket holder and a reassignment in the military he still travels 3.5 hours to most home games. His infectious loyalty to the Washington Capitals Hockey Team has included his entire family and the are all rabid fans today.

So, thankfully, we were invited to a party in which Slapshot, the team mascot, came out to personally congratulate James and his family. Slapshot was gracious in photo ops as well as signing autographs for all.

BSoleille! Finding a way to cheer on the caps pre-November!
Terri
Posted by Terri Tomoff at 10:06 PM