Rifling Through the Last Frontier...Our Back "Office"

We are choking on thousands of photographs that could take months to go through, along with other paper paraphernalia collected in the last 24 years while living in Maryland. We have cleared some space in another part of the house for the "staging" area for all the tubs of stuff, but then what? Getting the room ready to replace the old carpeting and general clean up (it was painted only a couple of years ago), but it all seems so daunting. Since we don't have a basement, this "back office" has been our faux basement and catch all for way too many things accumulated through the years.

Our good son Ryan has been gently directing and guiding us to see the light, and to lighten up the space he works and spends a lot of time in, and we can't blame him one bit! Oh, but the memories, the photos, the taxes...ahem, and a lot of memorabilia generated by a guy who worked in the sports and entertainment world for over 20 years. It's a lot to process for sure, and we are tackling it as best as we could.

My burning question...what does one do with thousands of photos taken from after college (or late 1970's) to about 2000-2002 (that's when digital cameras came onto the scene)? We will eventually, or shall I appropriately say, it will be me, going through the memories, keeping some, and tossing the rest I'm afraid. I guess we cannot keep it all, and don't want to either. Deep breath as we continue the photo tackling, and frankly, it's about time.

So some photos that stuck out of the boxes and are definitely throwbacks are below.
First photo is me and my brother-in-law, Don Tomoff, either before or after the race (Bill taking photo) 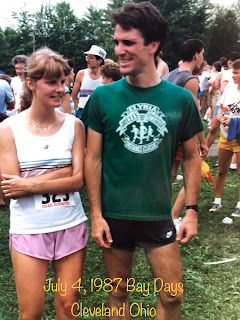 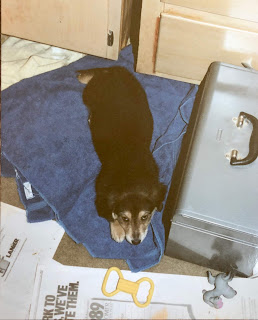