We cheered each other on while writing papers; studying for exams; stripping labels off cans at college parties (sorry guys); executing unbelievable college pranks (madd ringer); helping each other to get up early to get to morning run by 6:30am; eating veggie pizza pies at Myles Pizza; watching the last episode of "S-Mash" in 1982 on a Black and White TV; dancing the night away at Uptown in Downtown Bowling Green, Ohio, and, 867-5309! My accomplice that I am forever grateful for our 40+ years of friendship: Jennifer Lynn Groves! She was my Robin to my Batwoman, ahem...

Jennie (AKA Jenno) was my college roommate for three years (we had others our frosh year), at Bowling Green State University. We met as freshmen on the Cross-Country and Track Teams for the University beginning in August of 1980 (pre-camp) and became fast friends. By sophomore year, our coach, Sid Sink, paired up runners who wanted to room together (it was not so fun with us having to get up so early with our previous roommates that we loved, but they did not understand that early morning "madness." Jen says that I was "responsible" for bringing her out of her shell, and I am grateful I was able to do "my part" as a college roommate, and here all along I thought it was my study habits!

We had a great experience in dorm living (Batchelder Quad), and met a lot of great and fun people on our hall. While talking recently, Jennie affirmed that college/dorm living are the next steps in taking care of yourself while living with others, and looking back, academics seemed "secondary" to the skills we learned as young people about to embark out to the rest of the world.

By our junior year we were able to move off campus and chose to live in the same place Jen's older brother, Brady, lived while he was at BG; Buff and Clough (pronounced Cluff). That junior year we lived with seniors from the CC/Track Team; Jodie Welly Smith and Terri Gindlesberger Lemke; and our senior year, lived with juniors Rosalie Cocita Franek and Joanne Lancioux Wegert. Our collective friends spanned the freshmen to seniors, and we loved that!

Jen was born and raised in Mansfield, Ohio, to parents Harland and Joan, along with older brother Brady, and younger sister, Connie. She enjoyed a typical childhood in Mid-Ohio, and graduated in 1980 from Malabar High School. She majored in Business Administration at BGSU, and I'm sure she will never forget her Econ 101 Class or Accounting 1 (I won't!) Lots of studying for sure with these two classes. After graduation, Jen took off for Europe for the summer of 1984. Once back, she moved around quite a bit to her delight: Cincinnati, Montreal, back to Cinci and then Boston/Brookline, MA. She worked various jobs in retail, plus a travel agency for runners, and then the Dana Farber Cancer Institute (Jimmy Fund Clinic) through 1992.

She met her husband, Dan Hickey in 1990 in Boston (rent controlled apartments). He lived upstairs and locked himself out, so of course, he knocked on her door to use the phone...and the rest, as they say, is history. Their instant connection turned into an engagement, a move to Northern Vermont, then marriage on August 15, 1992 on a farmette. They lived for a total of eight years in four different towns there. In the summer of 1996, when we first moved to Maryland, I took a road trip to Vermont with a four year old and almost two year old for a visit with Jen and Dan. Believe it or not, we did a lot with the kids (Ben&Jerry's/played in their creek and drove and hiked up to the summit of Mt. Mansfield).

Dan job's, whose career has been in print/publishing and digital media, meant moving around quite a bit. But they really enjoyed their moves to various parts of the country and it has certainly enhanced their lives as well as their two sons. Their first son, Samuel, was born in 1997, and then Clay, who was born in 1999. By this time they moved to Northern Virginia, but after a couple years, moved to Des Moine, IA, where they spent a good chunk of time as the boys entered their formative years of school and sports (Hockey!).

As a lot of folks know, moving is a challenge, and it was no different with Jen. She had to meet new friends, and then leave them behind with the next move (military families can certainly relate). She's a very easy going gal, so it is easy for her to make friends wherever she goes and adapts with her new surroundings and everything that it entails. She mentioned that "anything is possible," and nothing feels permanent except her family, therefore, "home" can be anywhere. This was especially true when they packed up the kids and dogs and moved to Park City, Utah, in 2012. This was a hard move for her boys to adjust initially, but by the time came for another move, they simply loved the outdoor sports and adventures this part of the country offered them.

I must say Jen has a lot of interests, and parlayed her love of nature and science by earning her Masters Degree from Johnson State College while still living in Vermont. She has volunteered in classrooms, was a middle school science teacher for three years, and by the time they moved to Utah, began her favorite job; working as a naturalist in and out of the classroom. Not one to "rest," this energetic blue loving gal, while raising her boys, co-founded of a youth group in Des Moine called KWAKERS, or Kids with a Kause. It was set up for local youth to serve others by doing fall clean-ups, baking cookies for the Ronald McDonald House, hosting a sock drive for the homeless and the like.

Today, Jen and Dan, and their family, live in Nashotah, Wisconsin (past 2.5 years). Jen works as a naturalist for the Retzer Nature Center and runs several programs for kids from 2 to 92; and one day a week works at the Stone Bank Farm Market near her home. Her superpower(s) are: Wisconsin Master Naturalist and Certified Instructor for the programs. She explained to me that connecting people to nature brings her great joy. Her job encompasses helping the earth and the animals she comes in contact with: "from Moose to scat if you can believe that."

And lastly, due to a running injury years ago, she tries to run about two times a week nowadays. However, she loves to hike, kayak and backpack. Her yearly backpacking trips she takes with her gal pals are epic because she loves the outdoors, and sharing the experience with her friends and family too when they can get away with her!

BSoleille! The bright side of #CelebratingOthers with Jenno Groves - college roommate extraordinaire (note: giggled while writing this as the memories of those college days flooded my mind...along with the photos below).

Directly below are photos from Jenno: 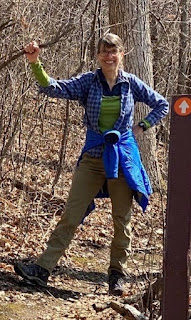 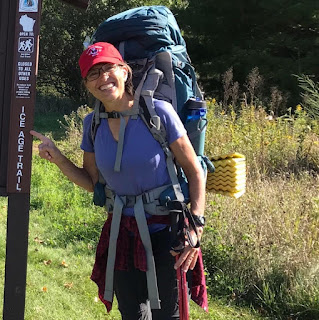 That is a great article about a truly great woman. thanks for sharing! - Lyn (childhood friend and locker buddy)