Mark Neal, born and raised in Morgantown, West Virginia, is one of the nicest guys I know. He is married to my good friend, Laura Murphy, and my hubby and I met him in Chicago while he was dating Laura back in the late 80's. I am thrilled to shine the spotlight on this awesome guy, dad, friend, husband and baby brother of eight!

This talented runner, was born to Dorothy (Librarian/Homemaker) and Oliver "Peck" Neal (Professor of Agriculture/Horticulture at WVA), 15 days after I was born in November of 1961. He self proclaimed that he was just a "little spoiled" due to his birth order; each child named with a biblical name that is parents initially did not realize with the first few kids. They are: James, Andrew, Peter, John, Sarah, Rachel, Ruth, and Mark. They continued the tradition...

I loved the fact that Mark revealed that he had 5 "dads" growing up because of the birth order which included four boys first, then three girls, and then Mark. He rattled each of their names so fast (apparently a sibling competition on who can say all eight names the quickest), but then slowed down enough for me to write them all down, in order. Each of the "4 Sibling Dads" taught Mark something, which he holds dear to this day. Brother #1 taught Mark to play table tennis (Mark is a fierce competitor even today); Brother #2 taught Mark the value of the outdoors (fishing/horseback riding); Brother #3 taught Mark to help others because this bro was always in training to be a Dad; and Brother #4 taught Mark the finer points of Art and all that it encompasses. Unfortunately, Brother #3, Peter, passed away in 2014 from cancer, and both parents are also deceased.

Mark admitted that he had a very nice childhood, and attended the Morgantown Public Schools graduating in 1980 from Morgantown High School. He was also a competitive runner in the state of West Virginia, and competed in track and cross-country with accolades in track (2nd in the mile at the 1980 state meet and 4th in the state cross country final the fall of 1983).

He continued his education at West Virginia University, earning a Bachelor of Science in Mechanical Engineering in 1984. Again, Mark's diligence in running gained him a partial scholarship all four years to run on the CC and Track Teams, with a berth to the CC Division 1 Nationals in 1983 - a highlight of his college career, and rightfully so!

In the fall of 1984, Mark continued his love of engineering and physics by going to graduate school at Northwestern in Chicago, IL. He earned his Masters Degree in 1987 in TAM, on his way earning his PhD in TAM, or Theoretical and Applied Mechanics, possibly better known as computational mechanics, graduating in 1989. He mentioned he loved going to school in Chicago because, not only did he have a sister living there at the time, it was such a different environment than he was used to in West Virginia.

Through all his graduate studies, he still found time to have fun (and run), especially in the fall of 1986 when he went to a party and met his future wife, Laura! They dated the rest of Mark's time in Chicago, and then moved to Rochester, Michigan, when Mark took his "first job" out of college in 1989 to work for General Motors, Inc., and stayed for the next 30 years, retiring in 2019 (where did those 30 years go, Mark...Laura?)

Mark enjoyed many aspects of his job while at GM, and did mostly computer simulations of vehicle crashes to help keep us all safe when operating any motor vehicle. His full career also included; occupant and pedestrian safety; simulation of vehicle crashes and deformation of a vehicle (think: seat belts, airbags and how it affects crashes). The last seven or eight years at GM, Mark worked in the "human" model simulators and crashworthiness, which he stated was very interesting and no two days were alike. In addition to the advances of crash testing, Mark enjoyed collaborating with people all over the world working with simulation and all that it entails regarding any type of crash (as we can see, a lot!)

This ultimate family man married his sweetheart, Laura, on July 27, 1991, in Rochester, MI. Their two children (twins); Abbey and Casey were born in October of 1997. Life has certainly been busy for Mark, who leans towards his favorite color blue, but happened to initially state his favorite color changes every day. That's a new one for me...but I love all the colors too!

And when I asked Mark what his favorite gift he ever received, he told me a story that I will never forget, and I hope my readers won't either: It goes like this - While still in college, his mom gave him a little bookcase filled with paperback books for Christmas that year. At first Mark thought the gift was kind of "old-fashioned." He was convinced, initially, that he would never read any of them. But remember Mark's mom was a librarian? She also had her Masters in Library Science, so, of course, this woman was very well read. This "old-fashioned" bookcase, in fact, housed her favorite books from the 1940's and 1950's. Then one day, Mark picked up a book from the bookcase, opened the first page and indulged himself to read it and finish it and the lightbulb went off. She carefully selected each and every book that were her favorites, thinking, but then knowing, that her youngest son would obtain great value in reading them...if he ever cracked one open. Not only did he crack that first one open, he went on to read every volume in the bookcase, much to his delight. He said it was the greatest gift ever, and I agree! (He did eventually tell his mom too that it was the greatest gift!)

Now, if you are wondering on some of the titles, here are Mark's fav's: All the Kings Men, A Bell for Adona and Ferrel Sams. Mark's mom certainly knew her literature!

Mark, ever the sportsman, continues to run, swim (he's a certified lifeguard!) and bike when he can safely do so. He also plays a mean game of table tennis (rated 1800+), and parlays his superpower of being a course measurer; measuring running and triathlon courses all over the USA.  His best 10K is 29:40 (split from a longer race) and 30:40 in a road race. His best 1500M is 3:49.78, indoors his sophomore year.

I'd love to end Mark's post that sums up Mark to eloquently in his favorite quote:
"An optimist believes he lives in the best of all possible worlds; and a pessimist fears this is true."

BSoleille! The bright side of #CelebratingOthers with Mark Neal! Cheers to you and your family!

Photos below from Mark: first one is Mark and family; Abbey, Laura's Mom, Casey and Laura 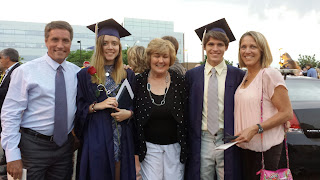