Social media, I must admit, has brought more friends together than not I suppose, and I'm thankful to reconnect with another Rhodes Ram Classmate of 1980; Lisa (Wright) Speckman. What has intrigued me most about Lisa on social media, is her beautifully written accolades about her family and friends through the last several years. Her love and admiration shines through with each of her carefully crafted posts that I know must bring value and happiness to her inner circle and beyond.

Lisa and I met at Benjamin Franklin Elementary School in the 6th grade (as she was in another homeroom and she went to a parochial school from K-5th); but we really became fast friends once we entered Charles A. Mooney Junior High School in Cleveland, Ohio. We spent countless hours at each others homes and talked on the phone (when we could get on, ahem), as we were your typical junior high kids trying to make good.

Lisa, 57, was born in Painesville, Ohio, to Jean and Bill Wright, but was mostly raised, with her siblings, in Cleveland, Ohio. The third of three girls (Gina the oldest, then Teresa (Terri); and two younger brothers, Andy and Jamie, it was a super busy household for the entire family. Since I was the eldest sister in my family, I admired her "older and cooler" sisters and liked to hear their stories while hanging out at their house.

The junior highs back in the 1970's (in Cleveland) went from 7th grade through 9th grade; and it was in the 8th grade that I gave Lisa the biggest shiner of her life (the only one). I was monkeying around in gym class swinging a wooden baseball bat (waiting to go outside) and Lisa was standing fairly close to me though I did not see her...until I swung the bat in which I connected squarely to her left eye, and caused the biggest shiner of the year (and thankfully, no other eye damage). I had to ask Lisa if I apologized, and she concurred that I did over and over again (and even sent me the message I wrote in her yearbook). I have to say, I apologized all over again on our most recent talk.

By the time we headed to high school, we drifted apart due to Lisa getting a job once she turned 16, and me concentrating on sports (track and field). Lisa added that she was also in the COE program in which she was only in the school for the first one or two classes before she was out in the "real" world" working.

By the time we graduated on July 18, 1980 (late graduation date due to a Cleveland Teacher's Strike in the fall of 1979), Lisa was on the move making money and foregoing college at that time. Lisa reminded me that while we were in school, we were asked: "are you going to college? not where you are going to college?" It's not a new concept, but it's where we grew up that made that distinction.

I love the fact Lisa disclosed to me that she loves her job(s), and has been working, since high school, in either the banking or in accounting world. With Lisa's attention to detail, and her love of numbers and a great memory for complicated tasks, she moved up with every position she has held through the years (from bank teller to payroll supervisory roles). For the past 19 years, she has been employed by the Cleveland Clinic in their payroll department. She admitted that she loves it because it's constantly changing and she thrives on learning all the new changes and challenges that come with her territory; not to mention that she is super impressed on how the Cleveland Clinic (a huge company of 60,000 employees) is handling the entire COVID-19 health crisis around the globe!

In 1983, Lisa married Dan and had two daughters: Lyndsay (born in 1984), and Maggie (born in 1987). Her daughters were the love of her life, but the marriage dissolved and they divorced in 1992. She then married Ken Speckman had her third daughter, Katyana (born in 1993), and life was good until Ken passed away in 1997 from (chronic) asthma. Lisa mentioned that all three daughters have some form of asthma but, thankfully, they are all well managed. Interestingly, with Lisa being a numbers gal, she said that her daughters birthdays fall on 7, 14 and 21 with "7" being her lucky number!

Once Ken passed away, handling the agonizing grief, plus now a single Mom, Lisa made strides to better her life and decided to take the plunge by going back to school. She incredibly earned an Associates Degree in Accounting at Tri-C in 2000 and life was hard at that point. Lisa was holding down a full-time job, taking care of her family and studying for a brighter future. But if anyone could do that, it was Lisa, with her can-do attitude and street smarts to boot. Lisa maintained that it took 20 years to get the degree, but ah, so worth it in every way. I could not be more proud to acknowledge all the hard work it took Lisa to get to that point!

Ten years ago Lisa started to mention on Facebook that she was so excited that her daughter, Lyndsay, was having a baby, and that meant Lisa was going to become a grandmother! I believe there was some sort of countdown, and that Lisa's Facebook posts lit up with her beautifully written posts and then the congratulations on how happy everyone was for her and her family once the baby was born. Don't you think it's in these precious moments that makes a life? And a life well lived? I think so too, along with the unwavering love that surrounds every one of us.

Today, this midnight blue loving lady lives in Fairview Park with her sweetheart, Ron (Commander of the Cleveland Clinic Police Department - and have been together over 15 years), and daughter, Katyana (aka Katie). Lisa now has five grandchildren, and loves spending time with her daughters and grandkids when time permits. Katie, as Lisa remarked, is a talented singer/songwriter and has great stage presence when she struts her stuff on jam nights in and around the Cleveland nightclubs. Never a dull moment when this young lady is belting out a tune around the house, or in the car!

Lastly, Lisa's superpowers include her love of office/school supplies and love of food; she loves to cook at any chance she can get (and noted that she would have become a chef had she known she could have made a career out of it). She also, as previously mentioned, has an uncanny superpower of remembering numbers and odd things on her job (from, like three years ago) which definitely makes her a valued member of her team, or any team for that matter, for sure!

BSoleille! The bright side of #CelebratingOthers with Lisa Speckman from James Ford Rhodes High School Class of 1980 and a dear friend reconnected!

photos below from Lisa (first one is Lisa and Ron) 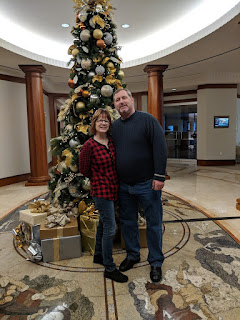