What's the Opposite of Spring Cleaning?

Well, how about Fall Clear Out? It seems like purging stuff is a never-ending task, and fall is really no different than spring when it comes to clearing out the junk. How does this stuff accumulate anyhow?

For those who remember my Aunt Mary, who sold me her huge sofa when we got married, I finally took the plunge and got rid of it. We've owned it over 32 years (it was over 75 years old), and it simply "needed" a new home. It was 110" long and extremely heavy to move. Thankfully, I called "Hunks Hauling Junk" and that huge sofa was "nothing" for them to move out so quickly. The only "trouble" was fitting into their truck (they had stuff to move over and around to make room for it). I guess they never thought they'd be moving such a big piece of furniture.

But even moving out such a big piece really did not make a dent into the whole picture of a household of stuff. However, it did give the other furniture some "breathing space," so it's back to the drawing board on what else I can get rid of this fall.

BSoleille! The bright side of purging household stuff. Maybe the trick is to not buy anything except gas and groceries? 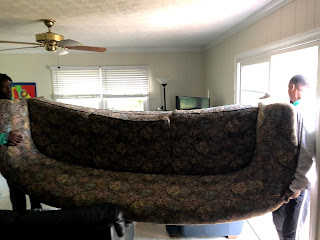 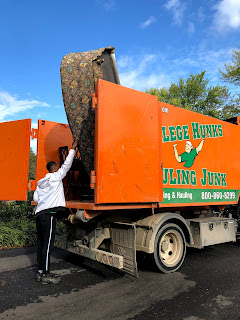