Who remembers the wonderful Jim McKay of ABC sports who said the "eloquent" words: "Spanning the globe to bring you the constant variety of sports... the thrill of victory and the agony of defeat...the human drama of athletic competition. This is ABC's Wide World of Sports!?

Tonight in Washington DC, I was able to attend on one side of town, the NHL's Washington Capitals game with son Ryan where, "the agony of defeat" was the unfortunate mantra of the game as the Capitals took a hard loss to the Colorado Avalanche 6-3.  The great part of the game was the start time: 5:00pm due to the MLB game, on the other side of town, start later in the evening. I joked to Ryan that we should take an UBER over the Nats Stadium to see if we could snag even a SRO ticket, but we decided to drive home and catch the rest of the game on TV.

And, there you go. The Washington Nationals just finished their game for the WIN over St. Louis 8-1; for the "the thrill of victory." While watching the game, I casually mentioned to Ryan that maybe we should have gone to the game across town...

As we all know, it's "Rocktober" and it's all about pitching on the road to the World Series of MLB! 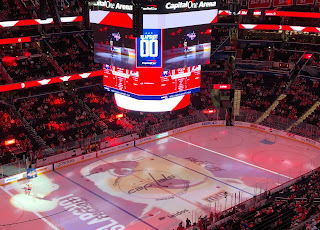 Standing Room Only tickets were going for $135.00! To much for me, but Love those Nats!