The Met and the MoMA


It's a treasure to live near the Smithsonian Museums in Washington, DC., and we like to go when we can, but not often enough, I'm afraid. However, I was thankful beyond belief to spend most of Friday in The Met and The MoMa. After waiting for the morning rush to get in right at 10:00am; I walked down to the Guggenheim to check out their gift shop before returning to the Met about 25 minutes later and got right in without a wait.

The Met is iconic and one of the best and the largest art museums in the United States. Of course, no one can see the whole thing - even the five hours I trekked through it. It was a "divide and conquer" mentality in what art I wanted to see, and the Impressionists never disappoint. The Met houses so many of the masters works from foreign lands, that those folks have to come see their countrymen's art in the US. The Monets/Manets/Van Gogh's/Degas/Renoirs never cease to amaze me, along with the thousands of others who come to ooh and ahh over these priceless works of art too.

In the late afternoon, I emerged down the "famous" steps and had lunch from one of the plethora of food trucks amassed on 5th Avenue. It was good to sit for a spell before I "hiked" down and window shopped on Madison Avenue to the MoMa on 53rd Street to meet up with my friend Patti. It was a FREE Friday at the MoMA, compliments of UNIQLO, a Japanese casual wear designer, retailer and manufacturer that "hosts" these events. The line went around the block to get in (and it's a big block!), but everyone patiently waited since it was the grand opening since the MoMA has been closed the last four or five months for a $400 Million dollar makeover.

I'm not kidding when I say it was a super huge crowd and it seemed to us that they reached maximum capacity in how many art aficionados they allowed in! We did not stay too long because of so many people squeezed into the galleries, but the renovation was very cool and the art just as cool! I need to return without the crowds, that's for sure. 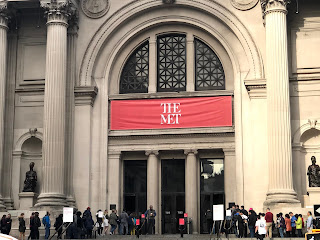 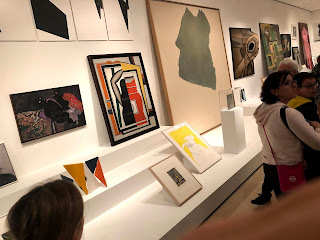