Communication System on the Pitch!

By the end of this year, I will have been an USSF referee (soccer) for 10 years. Within  those 10 years, I have refereed over 1000 games (youth, high school and adult leagues) and I am thankful for each and every one; the good, the bad and the ugly (believe it or not, some games are really good!). I have learned a lot along this soccer referee journey, including the behaviors of players, coaches and parents as you would think. Nonetheless, I tend to look for the good in each game, and I can fully admit that most of the players, coaches and parents are good, and therefore, passionate about the game itself. By and large, it all goes with the territory of the game.

Gratefully, I have had great mentors and other seasoned referees who have shaped me into the referee I am today. I only wish I could have started earlier, but it is what it is, and try my best in each match.

The day before I left for Arizona, I was "called to duty" due to another referee calling out, and filled in as an AR (Assistant Referee) on a high ranking local boy's high school team. They actually played a team that came down from Connecticut and I knew the competition would be stiff.

Once the center referee walked onto the field to introduced himself, along with the other AR, he produced a communication system and helped me put it into my ear and then velcro the "receiver" onto my arm. It was the first time I ever wore a "system" in refereeing a game and it was totally amazing! Flags are usually the only way we communicate, and they are good...enough, but talking throughout the game raised this game to a new level to me for sure. The game itself felt "smoother," and at the end of the game, I felt like I wanted to use this "system" in every game forthcoming; it actually made that much of a difference in my humble opinion.

But these "systems" are expensive, and this center referee is also a college referee and has done very high level games to warrant his purchasing of the communications equipment. You can bet I won't be asking Santa for this, but I'd sure like to work more games with someone who owns one.

Photo below with the crew (at RFK auxiliary fields in Washington, DC) 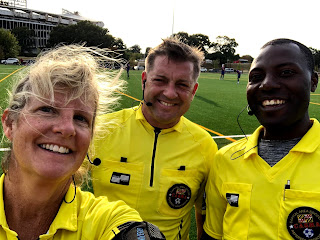