Surreptitiously last weekend, bee-mate Deb Hoppe hoped to snag a few opening day tickets for the Downton Abbey movie showing on September 20th (next Friday). What popped up on her phone screen instead was the notion to buy tickets for the advanced screening that was held tonight (shown in various locations across the USA). Apparently, it was not widely advertised, so she quickly sent "the call out" for other bee-mates, AKA Downton Abbey aficionados, to join in on the fun. Four took her up on the offer of purchasing the advanced tickets, and we counted "down" the days (five or so) until tonight!

The movie was FABULOUS! It's basically the same outstanding cast with exquisite costumes, beautiful jewelry, elegant classical music, and dazzling crystal glasses and flutes (I couldn't get enough of the place settings and glassware) and enough intrigue and beauty to be totally absorbed in the entire film from the moment the lights dimmed to the rolling credits.

If you are a fan, I hope you will see the movie and the continuation of the Crawley Family at Downton Abbey, their servants who work for them in the English countryside, and the way the story weaved around the visit of the King and Queen of England to their home in 1927 (based on true events of that time period). And, I think the director and the producers left a couple of storylines/cliffhangers to maybe someday do another movie (fingers crossed).

By the way, bee-mate Karen Todd, vacationing in South Carolina this week, was also able to snag two advance tickets for tonight's showing as well (she took her husband and the viewing was at same time as us; 7:00pm).

BSoleille! The bright side of the premier night - The  Downton Abbey movie! 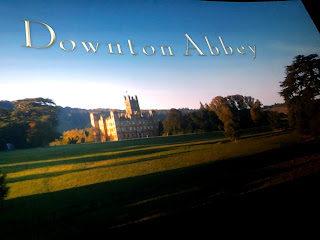