The past couple of weeks, my Friday celebrating others posts have highlighted childhood cancer survivors and "thrivers" during this month of Childhood Cancer Awareness Month. I love hearing their stories of resilience and forging ahead toward a bright future, but today I am turning the attention to someone who has made a career out of helping others, most notably with all ages of cancer survivors!

I'd like to introduce you to Dave Smith,  56 years young, and a very energetic force behind Special Love's Camp Fantastic and beyond. He was on the ground floor (literally) when Tom and Sheila Baker arrived at the 4-H Center in Front Royal, Virginia, when he just 19 years old. That meeting with the Baker's, and John Dooley (Director at that time and a mentor of Dave's) changed Dave's life forever! If you believe in serendipity and perhaps a higher power, this was it for Dave. Hang on for a minute and I'll get back to this life-changing meet-up.

Dave was born and raised in Phillippi, West Virginia, with two sisters (he is a twin with one sister, the other a couple of years older) and parents who worked for Alderson-Broaddus College (now a University and once was a private Baptist school). His Dad was an Administrator in Public Relations and his Mom was the Director of Humanities coupled being an English/writing Professor there as well. In 1981 Dave graduated from Phillip Barbour High School and continued his education at A-B College, graduating with two writing degrees and a political science degree.

Dave's love of outdoors, plus his winning smile and attitude helped launch him a summer job during the breaks from college by working at the 4-H Center in Front Royal, VA, under the Director and mentorship of John Dooley.

When the Baker's arrived at the 4-H Center unannounced in late August of 1982, Dave happened to be working the last week of their summer season due to his college starting later than the other Virginia colleges and universities in the early 80's. After a summer of working in programming, Dave was doing some maintenance work when they walked through the doors and began explaining their idea of a camp for kids with cancer to Dave, and Director of the Northern Virginia 4-H Educational Center, John Dooley. The Baker's explained that they lost their eldest child, Julie, to Lymphoma in 1976, and wanted to start a camp like one Sheila read about in a magazine when a young girl with cancer got turned away at a New York camp.

The Baker's certainly impressed Dave (and John Dooley), but there was a mountain of work to get done to make this idea a reality due to the magnitude of such an ordeal. But, with such a strong conviction of "doing the right thing,"  who could say no? So John Dooley and the Baker's set out to do just that; have a camp for kids with cancer at the end of the 4-H summer season. It was named Camp Fantastic and 30 children with cancer attended the inaugural year in 1983 (it's always the third week of August).

Dave was so smitten by this wonderful idea of camp for cancer kids specifically, that he volunteered his time and efforts the first four summers of Camp Fantastic and never looked back. By 1987, at the age 24, Dave was hired as the Executive Director of the program. The ensuing years saw tremendous growth and programs that cover the entire year with not only Camp Fantastic, but family weekends, parent's programs and a sibling camps called BRASS. By 2007, Dave was the CEO, and last year became the Senior Director of Outreach and Programs, a position that showcases his wonderful talents!

When I asked Dave what is his favorite thing about camp; not missing a beat, he answered that it gives everyone permission to be silly and authentic for all involved, from the campers to the staff and everyone in between. Dave also finds the goodness in everyone he meets and loves to share positivity and seeing people connect. He is very service minded and gives back with his time and talents any chance he gets.

This blue loving guy with three sons, Andrew 18 years old; Bryson 15 years old, and Willie, 12 years old, is also very musical with singing (he's a baritone) and playing various instruments, mostly self-taught. His favorite genre is Big Band, and Dave does a mean impersonation of Frank Sinatra (his fav crooner) and Michael Bublé. He loves all music except opera. In fact, Dave has traveled with the pastor of his church to Vienna and Slovakia in the 2000's after teaching himself to play bass guitar and then Bluegrass Music to go on said trips to play in those countries (he's a very smart guy).

He's also very involved with the First Baptist Church of Winchester, Virginia, and plays gigs at nursing homes in Winchester and surrounding areas. He says music is a good outlet and he loves to have FUN with it, bringing joy to many folks - young and old!

In closing, Dave has volunteered and/or worked for Special Love, Inc. for over 36 years! I'd say he knows camps inside and out, especially Camp Fantastic! Our family met Dave over 22 years ago at a family weekend in Front Royal, and we will never forget how he made everyone feel welcome and helped us forget our "cares" for a bit (he's also very quick witted and funny; a welcome relief to weary parents of a sick child) to enjoy what camp has to offer, along with the coffee house hour which did wonders for our souls! Now that is surely something to be very grateful for: HOW-HOW!

BSoleille! The bright side of #CelebratingOthers with Chief Camper Dave Smith! 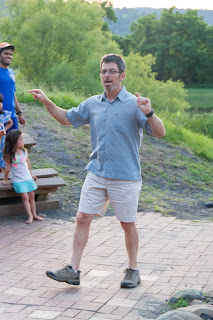