Brian Lowe is the nicest guy you will ever meet, and based on the story I am going to share, he doesn't have to be if he doesn't want to (but will anyways). You see, Brian is a five-time cancer survivor and has seen a thing to two (or five) no one would want to see. Yet, he continues to have a smile on his face, loves life and strives to find the good in everyone he meets each day.

My family and I met Brian and his family back in 2002 at a Special Love, Inc., family weekend. We weren't sure which weekend exactly, but both our families took advantage of the programs Special Love offered then (and now), and Brian happened to be one of the many 11 year old boys running around camp that weekend. It was years later when I figured out he's the son of Susan, and the sister of Christine!

While we talked about his cancer experience, Brian said that Special Love, hands down, was the pivotal camp/program, and the people associated with it, that helped him through his darkest hours. Now, that is truly something to be grateful for, right?

At 28 years old, Brian revealed to me that he was born in Germantown, Maryland, to Susan and Brian Lowe, Sr. He has one sister, Christine, now 25, who also participated in Special Love's family events and BRASS camp in her youth. Being involved in Special Love's programs was a family affair and Brian has even been recognized twice: Special Person of the Year in 2012 and Counselor of the Year in 2017. He loves to give back at any chance he gets to this beloved organization.

Brian further revealed that he had a normal childhood doing normal childhood activities when he noticed at age 10, after a basketball practice in May of 2001, that his left arm hurt and he was in an usual amount of pain. His Mom, Susan, who works at The NIH (National Institutes of Health) quickly scheduled a doctor appointment and an X-ray of his left arm that week. The diagnosis came back: osteosarcoma of his left arm in June of 2001. Before his limbs sparing surgery of said arm, Brian received six sessions of chemotherapy, then the surgery, and then six more sessions of chemotherapy. All treatment and surgery performed at NIH.

So what is "limb sparing" surgery? It is the removal of the cancerous bone and then that bone is replaced with a metal rod. Brian continued to battle and thrive until...

In 2002, with regularly scheduled follow up visits, Brian relapsed with Osteosarcoma in both lungs (two times on his left lung; and one time on his right lung) which, as one could imagine, continued to scare the "hell" out of everyone for far too long! This continued until until 2008/2009. And...to add insult to injury, Brian mentioned that he started falling unexpectedly and then was diagnosed with a "Peanut Brain Tumor" in 2008. Can you even imagine? Brian and his family persevered beyond measure in these very precarious days.

In addition to the above craziness, he nonchalantly told me that this new "fresh hell" included radiation, something he never had with his previous cancer diagnoses, along with another surgery to remove the tumor. But, this young man is one strong dude with a will of steel and an army of support that helped him battle through each and every diagnoses, surgery and treatment and any other hiccup that came his way through all these mounting years.

School, of course, was difficult with home/hospital teaching, and missing more school than attending at times during those difficult days, but Brian managed to graduate from Seneca Valley High School in Germantown, Maryland in 2010. His health was on the mend, and he was feeling much better than the previous 10 years, so he tried a few classes at his local community college following graduation in which he realized wasn't his cup of tea. He opted to get into the workforce instead and applied and was hired as a barista at his local Starbucks eight years ago.

Brian expressed to me his love of working at Starbucks, the support he receives from the management, and that his customers that have become his friends that keep him going and upbeat every day. Brian was even promoted to shift supervisor and exclaims that it's "crazy cool" to work at Starbucks!

Interestingly, at visitors night at Camp Fantastic in mid-August, I noticed that Brian had a "contraption" on the left side of his body. When I asked him then, and again for this interview, Brian revealed that his metal prosthesis snapped in half this spring. He's never had an adjustment since he was 10 or 11, and he's grown into a man with height and weight and the extra tension on the rod snapped in half! Yikes! Believe it or not, he said it was not painful until he tried to move it or lay down on that left side.

In May of 2019, the rod was replaced (lengthened to his current body proportion), but still needs to wear the gunslinger arm brace which is designed for his arm to be held up by the rest of his body, and until the doctor says he can start PT and remove the brace.

As I continued to shake my head and sigh over all Brian has been through in his battles of childhood cancer and beyond, I asked him how he continues to be so upbeat and loveable. Without missing a beat, Brian said that when a kid is diagnosed with cancer, they get a "shot" of reality very quickly, and that they figure out that "LIFE IS SUPER PRECIOUS!"

Brian went on further to state that "everyday is a blessing and to be enjoyed and not wasted." "Every second matters." And then this blue and green loving extrovert (his words) said that he loves and lives for his family and friends along with the deep friendships he maintains with each one; this really made my heart sing!

In addition to the love he has for those close to him, he also loves to talk to his customers at Starbucks, and people from all walks of life. He is willing to share his story, but knows everyone has a story, and is a willing listener to those who wish to share their story with him...preferably over a hot cup of coffee! 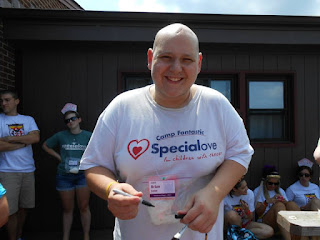