I think having a feisty spirit  is key to "win", or "overcome" many battles, including the battle of childhood cancer. When I think of someone having a great feisty spirit, I think of Brittany Ross, now 34 years old and happily married and living in a Denver, Colorado, suburb. She is a true fighter and a wonderful young woman and it was delightful peeking into her life now after her battle with AML (Acute Myeloid Leukemia) as a teen, and when we first met.

Brittany was born in Baltimore, Maryland, the only child born to Alan and Nancy Ross, and raised in Montgomery County (Rockville/Gaithersburg, MD). She also has an extended family with older siblings born to Alan and Nancy from previous marriages, and according to Brittany, they are all one big happy family today, and Brittany is proud of every single one of them.

When I inquired about her childhood BC (before cancer), she said had a typical one that involved a lot of music, musical theater and dance. She said, gratefully, that she "grew up on the stage." But by the end of 8th grade, she started feeling ill. Brittany acknowledged that her symptoms of strep throat, bad colds, pink-eye, the flu and bronchitis seemed somewhat 'normal' until she broke out with shingles on the left side of her face the fall of her 9th grade year. That's basically when her brother-in-law, a physician, demanded that she be seen by an oncologist quickly because he told Brittany and her family that; "kids don't get the shingles."

Brittany, age 15, was then formally diagnosed with AML (at Georgetown University Hospital on December 12, 2000. She claimed she was very weak, her head pounded, she was dizzy and her sight became blurry. All signs she was suffering from something for sure, and in fact, once the blood results came back, Brittany had 67% leukemia cells racing throughout her tiny body.

She started treatment the very next day due to her diagnosis and the extreme amount of leukemia blasts in her blood. Three pediatric oncology doctors treated her at that time: Dr. Aziza Shad; Dr. Amal Abu-Ghosh and Dr. Bracho. She was hanging on for dear life at this point, and was hit very hard with chemotherapy because she was told she has a 5-15% chance of survival.

According to Brittany, she received the best birthday gift ever when she heard the news that she was in a full remission and completely cancer-free four days after her January 13th Sweet 16th Birthday (2001) on January 17, 2001,  Of course, this was declared after her initial induction with several more rounds of chemo following that declaration, and pounded with even more intensive chemotherapy the next year. It so happened that the drugs wiped out her bone marrow (Note: she did NOT have a bone-marrow transplant), and did NOT have any bone-marrow in her body for 275 days! This was a very dicey time for her and her family and the doctors at Georgetown when she had no cells to fight anything off. She claimed she lived on blood and platelet transfusions, IVIG and antibiotics. She could barely eat or do anything else as well.

By December/January of 2002, Brittany was told she would need a Bone-Marrow Transplant so the leukemia would not come back. She and her parents did their due diligence in finding a suitable hospital etc., but unfortunately for Brittany, the National Bone Marrow Registry could not provide better than a 4/6 match. This was too risky for Brittany and it was a 50/50 chance of survival.

Brittany made the toughest decision of her life at 16 years old when she said she would NOT go through with a BMT. She announced she was; "DONE" with chemo and hospitals and the whole lot. Who could blame her?'

In the next year, after a very slow and painful recovery of her marrow and blood, Brittany's feistiness grew exponentially along with her self proclaimed stubbornness/bull-headedness/and strong will. These traits enabled Brittany to catapult her entire brain and body and to restore it to good health one cell at a time. Truly, this is quite miraculous, but for those who know Brittany, she is one tough kid and put her mind to it to only get well!

Once she began the road to a full recovery, she began going back to school once again. It was not easy for her, but she graduated in May of 2003 from Mt. Carmel High School in San Diego, CA. (She and her parents moved out there to be closer to their other children and grandchildren that January).

The following few years for Brittany opened up a whole new world to her. She started going to community college but learned while there that she has a learning disability (Asperger's Syndrome) which made school very difficult for her to continue. She then moved to Colorado to learn to live independently from a special program called: College Living Experience. This school enabled Brittany to learn in an environment with difficult concepts, but was supported by tutors and living with similar students. By May of 2010, she graduated with an Associates Degree in General Studies. She also had a stint working for Walt Disney World as an hostess in one of their resorts which she loved.

By March of 2012, she had gotten a job as a temporary employee for a traveling exhibit called: "World of Wicked" at the Cherry Creek Mall in Denver, CO. This was when the play "Wicked" was all the rage, is Brittany's favorite musical, and she became the "in-house" Wicked expert. It was while working at the mall she met her husband, Patrick McClellan, as he was working mall security at the time. They were married on September 28, 2013, at The Lionsgate Center Dove House in Lafayette, CO.

Brittany, who loves the color purple and ANYTHING sparkly, revealed to me that the last six years have been awesome! She's had some health challenges as many survivors have, but she married the best husband there is and cannot believe how lucky she is to have met this wonderful and supportive partner in life.

Patrick is now a computer systems engineer in IT and Brittany is a motivational speaker for St. Baldrick's.  They give back to various cancer organizations around the State of Colorado: Curesearch; Miracle Party; LLS; Make-A-Wish and a bit with Alex's Lemonade Stand. They also indulge their shetland sheepdog, Princess (6 years old). They love to dance; swing and tap, and he's her Fred Astaire and she's his Ginger Rogers.

Patrick also has written a children's book inspired by his wife Brittany: https://www.amazon.com/Prince-Norman-Patrick-McClellan/dp/1497585694

They plan on dancing their way through life together one step at a time...with music and a song in their hearts.

All photos provided by Brittany - below: Patrick and Brittany in dance class 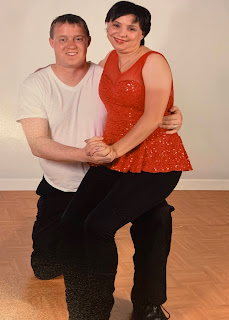