Do You Have a Funny Camp Story?

On the heels of yesterday's post, I began thinking of some funny stories my kids were "able to share" with me/us from their time at summer camps (Special Love's BRASS and Camp Fantastic). Mostly it included forgetting things and how they coped without "it" or used ingenuity to find a solution to what they did not pack for that year's camp.

"The Best Daughter" forgot her pillow one year. When we asked how she dealt with it, she said she wrapped the softest clothes that she packed in her towel (hopefully, it was dry...) I think the following year after the "no packed pillow," she forgot her towel(s). When we asked how she dried herself after a week of showers, she said she used her clothes and hung them to dry for the next day.

A mom of a young 12 year old boy back in the early 2000's told me she packed a kit of toothpaste, toothbrush, deodorant, clippers, shampoo and soap. It was never opened...for an entire week! When she asked her son how he washed up in the shower, he told her he didn't, rather he swam that day in the pool and that counted as his daily bathing routine (approved by his counselor to boot!). More importantly, she wanted to know how he brushed his teeth for the week. Without missing a beat, he explained that his counselor lined up his charges and squirted a bit to toothpaste into each mouth telling them to swish it all around and spit it in the sink. Done!

Since I love the summertime so much, it's difficult to let it go. But everyday we inch closer to the start of another school year, and all the stores are freshly stocked with back to school supplies. Not only that, but Christmas stuff as well. Ugh.

If you have a funny camp story from your own experience, or from your kids, nieces or nephews or anyone you know, can you share it here, please? Let's have a couple more "laughs" on camp escapades before our summer ends.

Pillow and towel, the two most forgotten items to pack for camp (or at least in my experience). 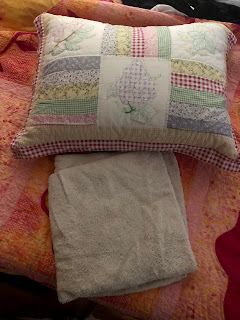