It's pretty awesome talk to an astrophysicist almost daily while at the pool (before I jump into the pool for lap swimming); because they are so interesting and super smart, and Dave is no different! I met Dave Harding, and his wife, Alice (she is an astrophysicist too, and super smart as well)), when we first moved to Crofton, Maryland, as our daughters became friends during the summer pool season and swim team activities.

When I asked him if I could "interview" him for my blog, he was "all in." According to Google, "Astrophysics is a branch of science that applies laws of physics and chemistry to explain the birth of life and death of stars, planets, galaxies, nebulae and other objects in the universe." Therefore, you basically need a doctorate degree to work anywhere in this field.

So how does one become an astrophysicist? Through a ton of study, by golly, but here is how Dave winded his way to his illustrious career.

Dave was an only child born in Paris, Kentucky, to an engineer (Army) dad and a secretary mom, but was raised in Maine near Acadia National Park. Interestingly, Dave's father and grandfather were Maine Lobstermen, and Dave also was considered a lobsterman as he worked in the "family" industry throughout his youth and college days. He said he loved every minute of it and it provided a good income to help pay his college tuition bills.

Dave then pursued an engineering/physics degree at the University of Maine in Orono, ME, graduating in 1968. Following graduation, he worked for two years at Hamilton Standard and Pratt Whitney, in which today those companies fall under the umbrella of United Technologies. In those two years of working, Dave realized it was not a good fit for him working in industry and decided he loved to study and returned to grad school at the University of Massachusetts at Amherst in 1971. He began with his first loves of math and physics, but switched to physics and astrophysics where he completed his doctorate (PhD) in 1977.

During those precious years, Dave was interested in black holes; but in 1972/1973, they were not proven, highly doubted, with virtually no support from the university, and therefore he moved on to other celestial interests in the field. However, he originally thought that the black holes in the universe were the source of the quasars, which today it is known "fact" and standard thought (others were also interested in this phenomenon back in the 1970's as well).

So if black holes and quasars were limited in the studying scope, Dave threw caution to the "stars"
and began his study of neutron stars, which were the "next big thing" and still is for Dave! Neutron stars are created when giant stars die in supernovas and their cores collapse (and a whole bunch of other technical jargon!). Dave's wife, Alice, whom he married in 1977, also studies neutron stars and has had an illustrious career at NASA in their celestial programs throughout the last few decades (she is still working in the field).

In 1980, they moved to Crofton, Maryland, when Alice finished her PhD and started at NASA. But prior to Alice finishing her schooling in the late 1970's, Dave decided to teach math and science at various middle schools and high schools in Massachusetts and Northern Virginia. Once in the local area of the Naval Academy in Annapolis, Maryland, Dave was introduced to one of Alice's colleague's who knew of a math/science position there. Since Dave had the expertise in math/physics/astrophysics/engineering, along with experience in teaching, it was a match made "by the stars." He then taught electrical engineering for 25 years at the United States Naval Academy to several thousand midshipmen and midshipwomen who are spread around the globe protecting our shores and the larger world. He retired in 2006.

Remember Dave's daughter from the introduction? Well, her name in Jennifer, born in 1992, and also has her PhD in Geophysics. The apple doesn't fall too far from the tree, right? She currently works for Repsol, and analyzes data in the gas and oil reserves in Houston, Texas. She certainly had great role models, and two parents that could help her with her difficult math homework~! Lucky girl!

At 73, Dave is still quite active working out and playing tennis with his wife, Alice; reading a lot of books (he always has an interesting book with him at the pool), and loves to learn about science and nature at every turn. He loves the color orange, follows sports, and likes to discuss a wee bit of politics when the mood strikes. He's my favorite pool friend because he also likes to only sit in the shade like me! 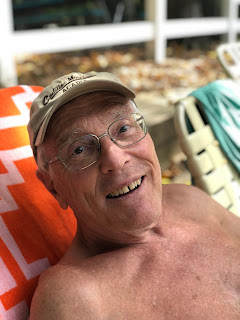