Just like a fine automobile, investing in a good sewing machine is tantamount to driving it many miles and years. Last December I bought a Bernina 570 sewing machine from Hinkletown Sewing in Ephrata, Pennsylvania. For the last year, I've "pinky swore" that I would only sew with this machine (along with Carrie Casto and Mary Nielsen who also bought this machine), so we could really get to know our machines; it's tempo, sounds and capabilities.

Fast forward to today when I took my machine in for its one year check-up/clean-up/oiled-up (traveled with bee-mates; Karen Todd, Susie Stevenson and Deb Hoppe), and learned that my machine is still in great shape (of course it is!), and that I've put on 1,003,609 stitches to date!

But I wanted to learn more about this business that has been run by this Mennonite family for over 60 years on a 43 acre spread in the farmlands of Eastern, PA. So I spoke with the patriarch of the family, Ervin Zimmerman, who at 68 is sharp as a tack and loves to please his customers.

Ervin noted that the sewing business was started by his father, Ezra, in the 1950's selling Singer Sewing Machines, and then moved his family to the location they are in now in 1966, and began selling Bernina Sewing Machines. Through the years, the business grew and was passed down to Ervin and his family which includes his wife, Elle Mae, eight children, and now three grandchildren. It's truly a family affair, and everyone knows everything about the business (selling/repairing/teaching).

When I asked Ervin what he likes best about the business, he said he loves all his customers and servicing machines (and they can service any make and brand to boot!).

But what is really fascinating about Ervin and Hinkletown Sewing is that they have run a viable business to a tune of being the number one dealership of Bernina Sewing Machines in the United States, and possibly the world, without a website, computer or any social media. How can they do that you may ask?  Well, I had to. Ervin maintained that it's their impeccable work ethic, attention to detail while repairing machines and their overall superior service that keeps bringing customers back to their charming location. (They also farm corn and alfalfa and have dairy heifers that need tending to daily). When I queried whether or not they do any advertising, Ervin said he puts in advertisements in the local papers to Mennonites/Amish folk. And, he claimed that 80% of his business comes from a 50 mile radius of Elphrata.

Lastly, this man who puts his family first and who is inspired by the Bible (mostly New Testament) has never flown in an airplane and lives with very few "modern conveniences" (no TV, radio, computer), has shown that success comes in many forms, maybe even a little "old fashioned" according to some, but still realizing that building solid relationships are still important to maintain 'success.' 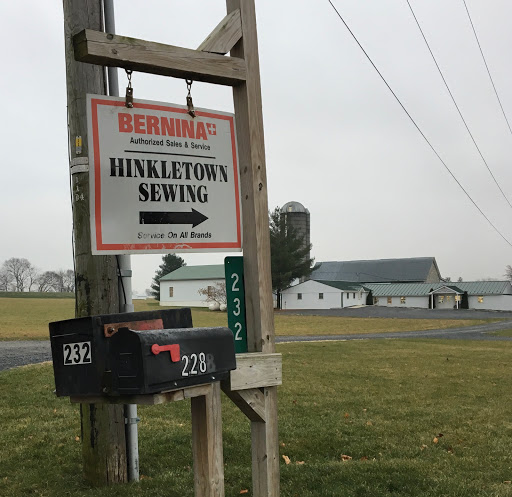 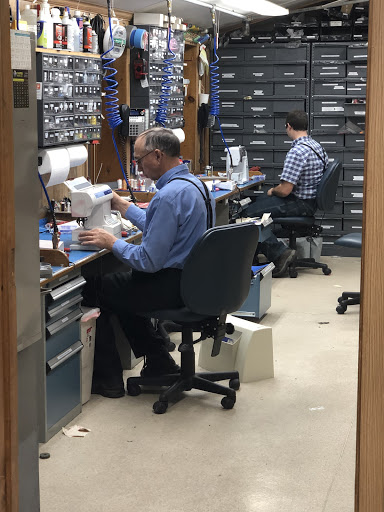 I was referred by members of the Annapolis Quilt Guild when I was considering trading in my BERNINA 830 for the Anniversary 880. I was not happy with the bobbin hook which BERNINA admitted was a problem. My local dealer tried to talk me into a 790 noting the 800 series problems. But in talking to the amazingly informed staff at Hinkletown sewing, I did decide on the 880. It was not a mistake! It isa beautiful machine! Now after purchasing the 880 I sat down to try the Q16 quilting machine. I had purchased a Handiquilter HQ16, but when I sat with the BERNINA I realized that it was so quiet.....and I am very sensitive to noise. So after a year, I couldn’t get that machine out of my thoughts and my husband said “just go and try it again and if you like it - just do it”. I loved it and Mr Zimmerman asked if I wanted to trade my HQ, and so I traded my quilting machine, the BERNINA 10 ft. frame and a Janome Professional which I never liked. I was so pleased with the bottom line and the quality of my machine quilting has gone up exponentially.

When I took my machine in for it’s check-up, they had it done and out of the shop within 3 hours. Just enough time to decide on the new Q16!

I have sworn that I will only use BERNINA machines and it was such a good recommendation to take that 2 hour drive ti Euphrates.