While sitting and eating my lunch on the outdoor patio area at my Lalibela hotel, an Ethiopian meal at that, an "older" woman stopped by once she saw me sitting alone. Other kids passed by me and asked for money, but I pointed for them to keep moving. This woman started to talk to me every so softly, all in Amharic, which I do not speak (but figured she was about to start begging). There also happened to be two tables of three men each on the patio as well. One table was comprised of men over 30, and the other table was comprised of younger men under 21 or so.

It was suggested to me to ignore all pleas, and not to look the beggars in the eye or offer them anything. The lady began raising her voice to me as I continued to ignore her. This went on for several minutes. Then without "warning", she began screaming (or was it screeching?) at me, but I held my head down and continued to eat my food without looking up. It was very uncomfortable for me, and I thought the manager on duty possibly heard the commotion and would come out on the patio to "shoo" her away. No such luck at that point.

However, while she continued screaming at the top of her lungs, one young man got up from his table and walked over to the beggar and gave her some coins (Birr) so she could move on...and did. Whew! He did that for me I know, and as he walked by my table, I mouthed "Thank You" and bowed my head. He nodded his acknowledgement of the awkwardness we all felt during that lunch hour, and I was so thankful he stepped up to diffuse this mortifying situation, because now thinking back, it must have been written all over my face. Honestly, I was a "sitting" duck and a prime target for the begging brigade while on that lovely patio. Minutes later my guide returned to pick me up for the rest of the day, and all was "forgotten."

Photos of the patio area (past the table in forefront) and my hotel. 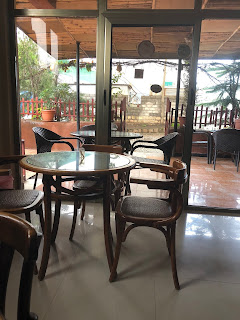 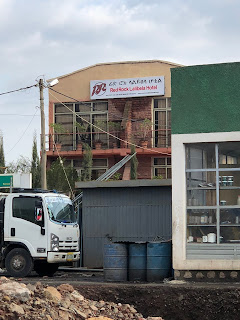