When my hairdresser of 15 years suddenly became unavailable, I turned to my bee and asked for a recommendation. Two bee-mates, in unison, shouted: "Joe!" On the spot (at my dining room table), they gave me the phone number at the salon they both go to: Hair by Ell in Bowie, Maryland. I called at that moment to schedule an appointment with Joe and never looked back. That was almost two years ago.

Let's face it, it can be "scary" trying a new hairdresser after going to someone else for such a long time, but Joe and I had an immediate connection (travel), and I trusted him to take care of my "blonde" locks. Of course, upon meeting him one can detect an "exotic" accent, and I opened our first conversation (besides what he was going to do to my hair that day) on where he was from originally. That opened the floodgate of a very interesting man that I wanted to find out more about, plus how he "landed" doing what he loves here in Maryland.

Joe, 54, was born in Jerusalem to Christian (Catholic) parents that also included three sisters and one brother. He speaks four languages fluently: Arabic, Hebrew, French and English. As a young man, he stated he enjoyed watching an older cousin color and cut hair and was fascinated by the transformation of the person she was working with while in the salon in his home town. He was educated in Jerusalem, and then started going to a Hebrew School, and College des Freres (Bab al-Lauq), until he felt school wasn't his thing, and changed his mind to become an hairdresser like his cousin, one of his sisters, and his wife too (a family affair for sure).

Joe actually started his own business styling hair at 22 years of age. He was getting quite well known in Jerusalem, and began traveling to London to learn more about hair and the business and taking classes from top notch salons there. He maintained that this suited his personality perfectly because he loves to meet people from all walks of life, and from all over the world. By 1994, one sister was living in the states (Crofton, Maryland), so he visited her and his niece too, who was the "shampoo girl" at Hair by Ell. He told the owner that he was an hairdresser when he visited his niece at the salon, so she hired him for two months before he went back to Israel.

In 1996, he married the love of his life, Rula (he told me it was love at first sight when they first met and very young in Israel - but waited a lot of years to tie the knot!), and they have two children: Marian, age, 21; and Andrew, age, 17. Rula is also is a hairdresser who works at Hair by Ell, and they all live in Crofton, Maryland.

By June of 2002, Joe and Rula and their young family moved to the United States permanently, and two weeks later, he started working at Hair by Ell and building his clientele. He says he is extremely grateful for all the opportunities he has had from an salon perspective, and has also cultivated his entrepreneurial spirit by owning an on-line eBay shop selling jewelry: https://www.ebay.com/str/bestofjoeartjewl since 2005.

This hard-working, navy-blue-loving husband and father of two is inspired by his children and family foremost, but loves to travel all over the world either solo or with family members. His favorite place to visit: London, England, and all of Europe. He maintains that he loves to make little discoveries in each country he visits, whether it's to meet more people, find interesting shops and out-of-way places, or ideas of how people live and the hairstyles they choose to wear.

Lastly, I ended the conversation asking him what most people don't know about him. He told me he loves scary movies and old time history shows from the 17th and 18th centuries. Awesome!

If you need a good cut, color, or some highlights, I would definitely recommend Joe; and he would love to meet you even more! 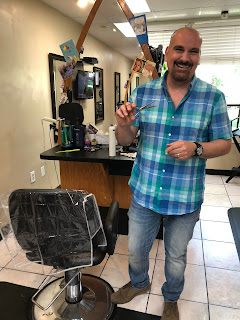 Both of them are great hairdressers. I used Rula when she was at a shop in Crofton.