I guess I have always been dazzled by travel and adventure, and after college applied to a couple of airlines to be a "reservationist"; though not a flight attendant, for reasons unknown, even to me! Of course, I never got hired, then found a career in my field of study, and that was that.

So I have always been curious about the career of a bona fide flight attendant, and thankfully, I've known one for over 15 years; Leslie Sumner. What is most fascinating to me about Leslie, is her seniority ranking with United Airlines, and the fact she currently ranks in the 97th slot of over 24, 000 flight attendants. You see, Leslie has been flying with United for almost 51 years! That means there are 96 people in front of her that have been with United longer. Her kids want her to work until she reaches #1! She's not sure she can live that long to reach that slot, but she is still flying the friendly skies nonetheless.

Leslie was born in Washington, D. C., and raised in Falls Church, VA; Palo Alto, CA; Geneva, Switzerland and Stamford, CT. In 1965 she graduated from Rippowam Senior High School in Stamford, CT., after all that travel and living in various places due to her father's job, she was glad to come back to Stamford to graduate. She has one brother that is an astrologer that lives in Minneapolis, MN, today.

At the tender age of 18, and the "need" to separate from the family home, Leslie decided to hit the road and attend college at the University of Denver. This was because of it's location, of course, but  truthfully, it was far from home. She was not sure about a major, but knew she liked international relations, and in a way, found her calling as a flight attendant, because the college gig did not work out for her. After two years of college life, and meeting wonderful lifelong friends, she left Denver to pursue other options and never looked back or regretted her decision.

She did a short stint at Sunset Books in Menlo Park, CA; and while working there, applied for a flight attendant job with United Airlines and got hired fairly quickly. She felt this job was her true calling because she loves to fly and help others, especially during long international flights. She's got stories galore of the thousands of passengers she has taken care of during her long career, most of them very funny indeed!

Leslie also loves the fact that as a flight attendant, all her travel arrangements are done through the airline, so she never has to worry about meals, a hotel, or any type of transport. Everything is pre-arranged while she travels. She typically flies international trips, so she is in the air quite a lot (or whatever is regulated by the airlines.) Interestingly, Leslie is not fond of regular "travel" when not in the capacity as a flight attendant, though has taken her husband and her children on several trips throughout the years (Got to use those perks, right?).

As for her family today, Leslie married her husband, Tim, (a former Merchant Marine/and retired Engineer for Naval Facilities) on father's day in 1978 in Bethesda, MD. They have three grown children, but currently live with three cats.

Besides her career in flying all over the world with United, Leslie has been a crafter since aged 9 when she learned garment sewing. Other hand-work followed closely behind with knitting (aged 10) and cross-stitching and needlepoint in her 20's. She has always sewed and loved that the best.

In 1980 when Leslie "discovered" quilting, she found another "calling." Intending to make a quilt for her then nine year old niece, she shifted to making a quilt for her nephew instead, a Log Cabin pattern that she tied instead of quilting it. (Incidentally, Leslie finally finished that "first" quilt for her niece when her niece turned 38 years old!). She also mentioned that as a "newbie" quilter back in the day, she made her own patterns (she did not realize there were books and patterns on the market); but looking back, creating her own patterns only strengthened her skill set where today Leslie is an award winning quilter. She simply loves color, and coupled with the combinations of patterns and color choices in fabric, makes her heart sing. She claims she is a precise piecer, and that is definitely reflected in all her quilts. To date, she has made close to 200 quilts, but has given most of them away. (Quilters are a giving lot.) Her favorite quilts are the ones she tackles that are far from her 'comfort zone' - as she typically works in brights and jewel tones.

This creative 71 year old dynamo has about a dozen projects currently in production; and teal is her favorite color for the moment. She revealed to me that she and her daughter both have: synesthesia - a "condition" where you associate numbers and letters with colors. For example: The letter "A" = red; "B" is yellow and so on.

Lastly, Leslie is also philanthropic with many of her quilts. She and her husband, Tim, have been involved with Home of the Brave (for both men and women in the military going through Andrews AFB), where Leslie has provided many quilts to the soldiers coming home from war; plus other assorted charities as they come up, and, of course, making quilts for community quilts that get distributed by the Southern Comforters Quilt Guild. And every year, she makes a blue and white quilt for a silent auction at Duke University Hospital to raise funds in benefitting their brain tumor research programs.

She is one busy and productive lady for sure. Beautiful inside and out!

BSoleille! The bright side of celebrating Leslie Sumner!

Photo of Leslie and one of her award winning blue ribbon quilts. 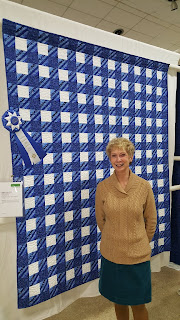