As we all know, most sports of any kind are male dominated. And even though girls and women have made great strides in participation, it really doesn't hold a candle to the boys and men who do ultimately participate. So if that is the case, it is the same thing in officiating any sport as well.

However, there are diamonds in the rough, and one of those genuine diamonds, in officiating sports, is Maria Cribbs. Maria ran track and played basketball in her youth. While in high school, the AD wanted some of the "older kids" referee the younger kids. A self-proclaimed "sports addict", even as a junior in high school, Maria took on that challenge of refereeing youth basketball and never looked back. That was over 40 years ago. Her "claim to fame" during those years was officiating a BB game while in college at the University of Maryland in their club program. Football players couldn't play "club football", but they could play "club BB", and that is what NFL Hall of Famer, Randy White did in his spare time from the classroom and the gridiron. She got "squashed" by him while officiating one of his games, and he never realized it until she was on the floor and down for the count! Though not injured, he offered her his hand to get up and the game continued uneventfully.

And then, about 25 years ago, she began coaching her two daughters, Ally and Colleen, in soccer. After a couple years, she wanted to become a better coach, so she took the soccer referee course, liked it, and once again, never looked back as she began refereeing more than coaching.

Maria inspires me and many soccer referees because she loves and respects the game and it shows in every minute she is on the field from youth to collegiate soccer games. She keeps it real from the first blown whistle. Refereeing has also taught Maria how hard it is to be a player; because, as she says, "it's a lot harder than it looks from the stands!" The greatest compliment for Maria is when she, as a referee, becomes "invisible" while the game is being played...it's all up to the players on how well it will play out.

Years ago, while "The Best Daughter" was playing youth soccer, Maria refereed quite a few of her games, and I observed her style from the stands and as a parent, and I even probably "complained"...out loud... at some of her calls. Nine years later I, too, became a lady referee, and learned how hard it was to become "invisible" like Maria. And like Maria, she maintains and sets out for every game that she referees is that the best refereed games are "firm, fair and consistent." Maria does that with flying colors. I am thankful to have refereed with Maria on many games as she has taught and mentored me to have my own style while on the field.

So what makes this only-girl-growing-up-with-four-competitive-brothers-sports-addict-travel agent tick? Why of course it's being with her daughters, their sports and goings on, and watching any sport that comes along, either on TV, at a local ball field, or any major league sports in the DC/Baltimore Metro areas, she is out there cheering them all on! She is a huge fan of any sport, with her current interest in curling.

And lastly, this boarding school graduate (and, by the way, loved every minute while attending grades 5-9) who loves the color "sky blue" declares that refereeing soccer is very challenging in that you really don't know what you are walking into in any given game. It's that uncertainty and challenge of it all that makes it all part of the fun while on the pitch!

BSoleille! The bright side of a #CelebratingOthers with Maria Cribbs! 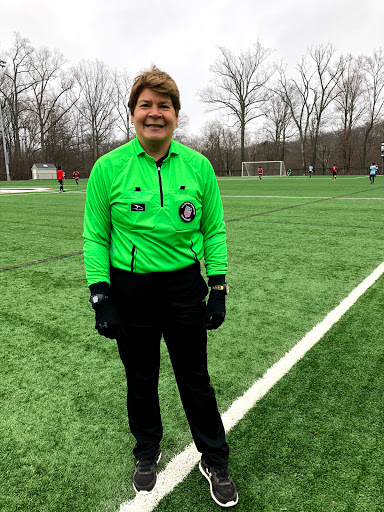